I have investigated hundreds of nursing home abuse cases, including a large volume of instances involving sexual abuse in care homes.

Below, you will gain the benefit of my experience to better understand the categories that these cases fall into.

Regardless of the classification, these forms of sexual abuse – of vulnerable elders – demand justice.  If you could benefit from the help of a skilled nursing home lawyer, I invite you to use the contact form on this page to schedule a free consultation with me.

5 – Get Help With Your Care Home Sexual Abuse Case

Examples of sexual abuse in care homes are frequently in the news and many common variables can be found in them.

The older an individual is as well as the presence of ambulatory limitations are some of the variables that make sexual abuse more prevalent.

Additionally, being a female will also ensure that there is a higher chance of there being abuse against an individual in a care home.

Sexual abuse can mean many things with the terms covering a range of both physical and non-physical acts.

Sexual abuse includes different acts of abuse depending on which term the abuse is being classified under.

There is assault and there is also battery as well as the concept of rape which itself can be classified under assault.

Sexual assault refers to a sexual offense that is criminal in nature.  In the case of sexual assault, the offender forces someone to engage in sexual intercourse with them.

Sexual assault can also be used to describe a number of other non-penetration acts.  Examples of this are kissing, touching, groping, or forcing the abused individual to touch them.

Rape is often classified under sexual assault because there is overlap in what these terms mean, so when there is talk of a nursing home rape, it can also be referred to as a sexual assault.

Sexual battery, unlike sexual assault, refers to a sexual crime that includes touching someone’s body without their permission.  Examples of sexual battery are touching someone in an intimate manner with the intent of gaining sexual arousal or gratification from the experience.

One example of sexual abuse in care homes is seen in the state of Florida where a woman in a nursing home was caught battering a woman in a state of undress by touching her for his own pleasure.

Hands On and Hands Off Offenses

Another way to classify examples of sexual abuse in care homes is with the offense being seen as either hands on or hands off offenses.

The prevalence of nursing home rape is not fully known because of the many gaps that exist in data on the problem.

One reason for this gap is that there is a large proportion of reported cases of assault where an unknown period of time passes between the incident and it being reported.

There is also a high level of embarrassment in older women to verbalize their experiences of sexual assault of any sort.

Not only is there a failure of women to report cases of assault, very often there is also mishandling by nursing homes in relation to sexual assaults and rapes.

I have personally had several clients drop and not pursue cases to avoid enduring the anticipated cross-examination and living through the incident all over again.

The federal government has in fact cited more than 1,000 nursing homes for mishandling or failing to prevent alleged cases of rape, sexual assault, and sexual abuse at their facilities between 2013 and 2016 alone.

Some of these nursing facilities have even been cited on more than one occasion.

The prevalence and failure in mitigating the problem are bad enough that children of rape victims from nursing homes testified in front of a U.S. Senate hearing in March of 2019.

An example of one testimony was the daughter of an 83-year-old woman who testified about her mother with Alzheimer’s who was immobile and unable to speak when she was raped, and that after the situation came to light, it was found that the Minnesota health department had actually investigated complaints of sexual misconduct in the past against the nurse and had not done anything about the situation.

Stories like this are why advocates, such as myself, fight tooth-and-nail against bad nursing homes to keep them accountable.

According to the National Center on Elder Abuse, sexual abuse is defined as “non-consenting sexual contact of any kind”, which includes, but is not limited to, unwanted touching; sexual assault or battery, such as rape, sodomy, and coerced nudity; sexually explicit photographing; and sexual contact with any person incapable of giving consent. 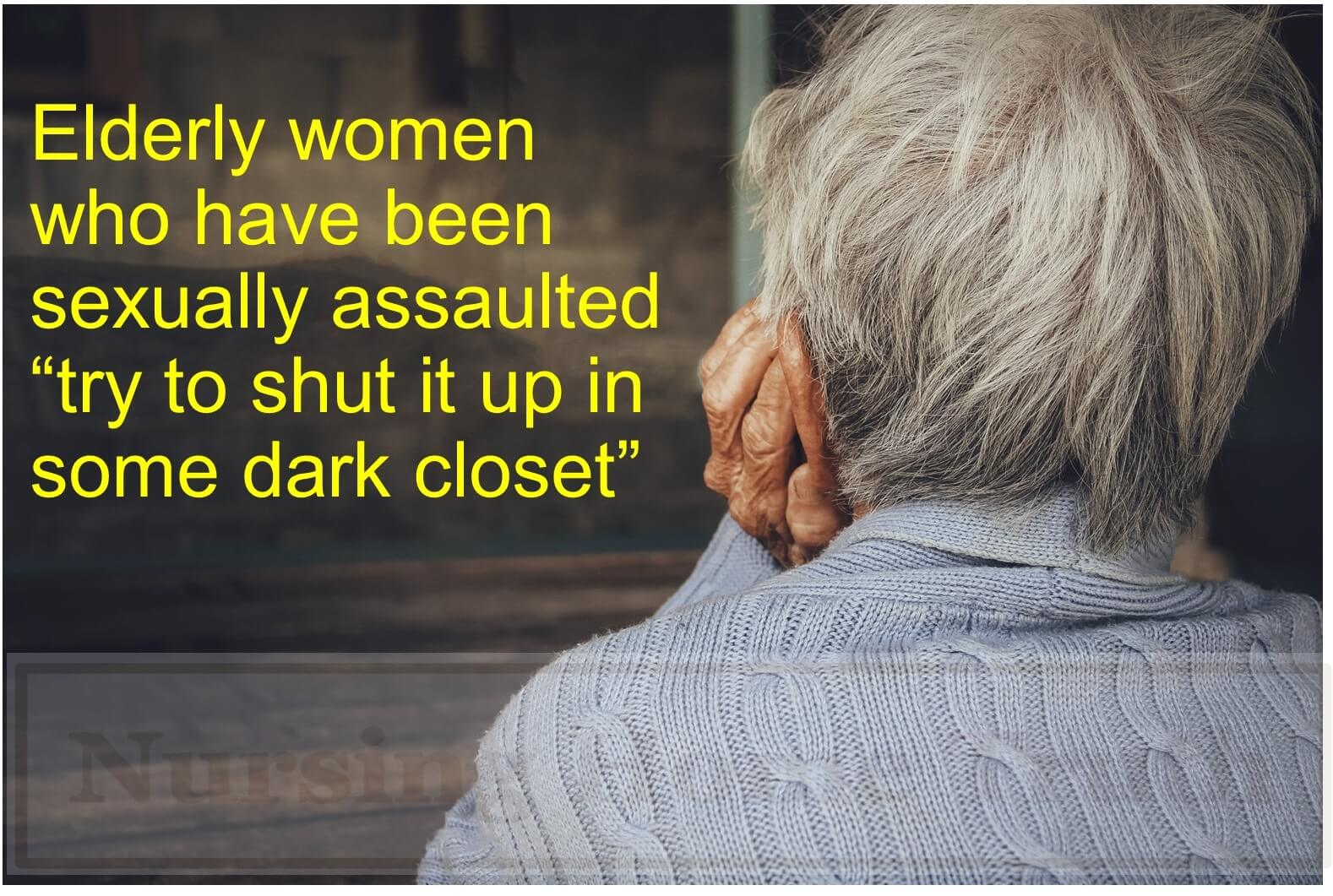 Those who are in a care facility are targets of these acts at a high rate because of their incapacitating  medical problems, their disconnection from people outside their care facility and the fact that they are often wholly reliant on others.

Nursing home rape often happens within this context and in particular, older women who experience sexual assault refrain from disclosing what happens to them because.

At times the women attempt to repress the assault, and this causes emotional and psychological distress which can affect behavior.

Those who have been sexually assaulted, in many cases, become withdrawn, depressed and even have a hard time making eye contact with people because of internalized shame from the incident.

Example of Sexual Abuse in Care Home in Arizona

An example of sexual abuse in a care home took place recently when a nurse plead guilty of sexual assault against a severely disabled woman who was in a long term care facility.

The assault took place in 2018 and no one was aware that the rape had happened until the woman was found to be pregnant and gave birth to a child.

DNA evidence was used to trace the assault back to the former Arizona nurse at the care home.

The case only came to an end with the guilty plea in 2021.

Example of Sexual Abuse in Care Home in Florida

Another recent example of sexual abuse took place in the state of Florida with the sexual batter of a 69 year old woman.

While undressing in her room the victim was battered by a nurse who was caught touching and exploiting the elderly woman.

The incident was caught because a colleague of the nurse walked in while they were sexually battering the woman who was a patient and resident at the facility.

What is the difference between sexual assault and sexual battery?

A sexual assault means that there is the act of penetration and forced contact such as rape. Compared to a sexual assault, a sexual battery involves the intimate touching of or rubbing on an individual with the intent of gaining sexual arousal.

Are sexual assault and rape the same thing?

When there is a clear example of sexual abuse in a care home, how often is the perpetrator prosecuted?

The first major problem in cases of sexual abuse is that they are not identified frequently enough and even those who are investigated for abuse are often not terminated from their jobs.  In examples of cases where the abuse was verified however there is usually a high rate of conviction.

How common is sexual abuse in care homes?

The issue of abuse in care homes is a serious problem that appears to have grown over the last 2 decades.  However, sexual abuse makes up only about 1-3% of the abuse cases.  This number is still high with thousands of examples of sexual abuse cases nationwide yearly.

What is the most common example of sexual abuse in care homes?

Get Help With Your Care Home Sexual Abuse Case

If not handled carefully, victims in sexual abuse cases are re-victimized during the litigation.  There is a gentle way to handle these cases to ensure the bad actors are villainized for their bad acts, for doubly-villainized for trying to attack and blame the victim.

If you or your family are the victim of sexual abuse in a nursing or care home, call me.  I will do everything in my power to bring the facility to justice for hurting the vulnerable citizens in our community.