In 2021 alone, I investigated instances of elderly women assaulted in nursing homes that involved these women suffering untold forms of nursing home assaults, including being choked, punched, thrown, and having food shoved down their throat.

These are despicable acts, and if you or a loved one suffered an assault in a nursing home, you deserve a vigilant, knowledgeable advocate to bring you justice.

Assaults in nursing homes are more common than they should be. In so many cases, avoidable injuries and even death are the result of nursing home employees or other residents assaulting elderly women in the nursing home.

Because these elderly residents are in the nursing home because they are unable to care for themselves, they are usually defenseless against assailants who attack them.

In pursuing these cases, nursing abuse advocates do what they can to help hold civilly accountable those who cause pain to and violate the trust of those who place their lives in the hands of care homes that should protect them.

Examples of nursing home assaults tend to involve health issues with assault issues which together become serious concerns for those who are on the receiving end of the assault.

Assault in Nursing Home : Case One.  In one serious example, an elderly woman who was meant to stay in a nursing home for a short period of time to recover from a recent surgery was neglected. Failure to move her and treat her rehabilitation efforts caused her to end up with intense open wounds on her back and shoulders which led to infections and pain.  Rather than help her, the staff ignored and physically assaulted her when she attempted to voice strong concerns over her treatment.

Assault in Nursing Home: Case Two. Unfortunately, these cases are not rare as only a few weeks before the sexual assault case, the bloodied and broken face of an 86-year old nursing home resident led to the discovery of verbal and physical assaults against the resident, which ultimately led to her death.

Assaults often take place because of frustrated employees who are either not adequately trained, lack support, are not verified or qualified to start with, or feel stretched thin and lack the temperament to work within a nursing home setting.

The frequency of assaults in nursing homes does not make proving these cases easy.

This does not mean that it is not possible, but rather that abuse cases need to be treated swiftly, and with competency so that there is a chance of proving the case.

The reason these nursing home assault cases are difficult is because they rely often on the word of individuals who end up deceased, incapable of expressing what happened to them, or those with severe illnesses like dementia that can render their statements less reliable in many cases.

Without clear evidence, the assaults are harder to prove.

The best evidence to use in cases of nursing home assault are medical records as these are more objective.

Records from both the nursing home, primary care and specialist providers making rounds, or hospital visits are all helpful as evidence.

Any observations by physical therapists or personal care employees can also be helpful to this end.

Evidence should be clearly documented in the form of photos, statements and any available medical reports.

It will be with evidence like this that there can be a better chance to prove an assault case.  Some common injuries or conditions that can help prove assault and abuse and should be documented clearly are:

◊   Injuries and Marks that Cannot be Explained

With evidence that documents incidents like these, there can be a higher chance of successfully proving your nursing home assault cause. 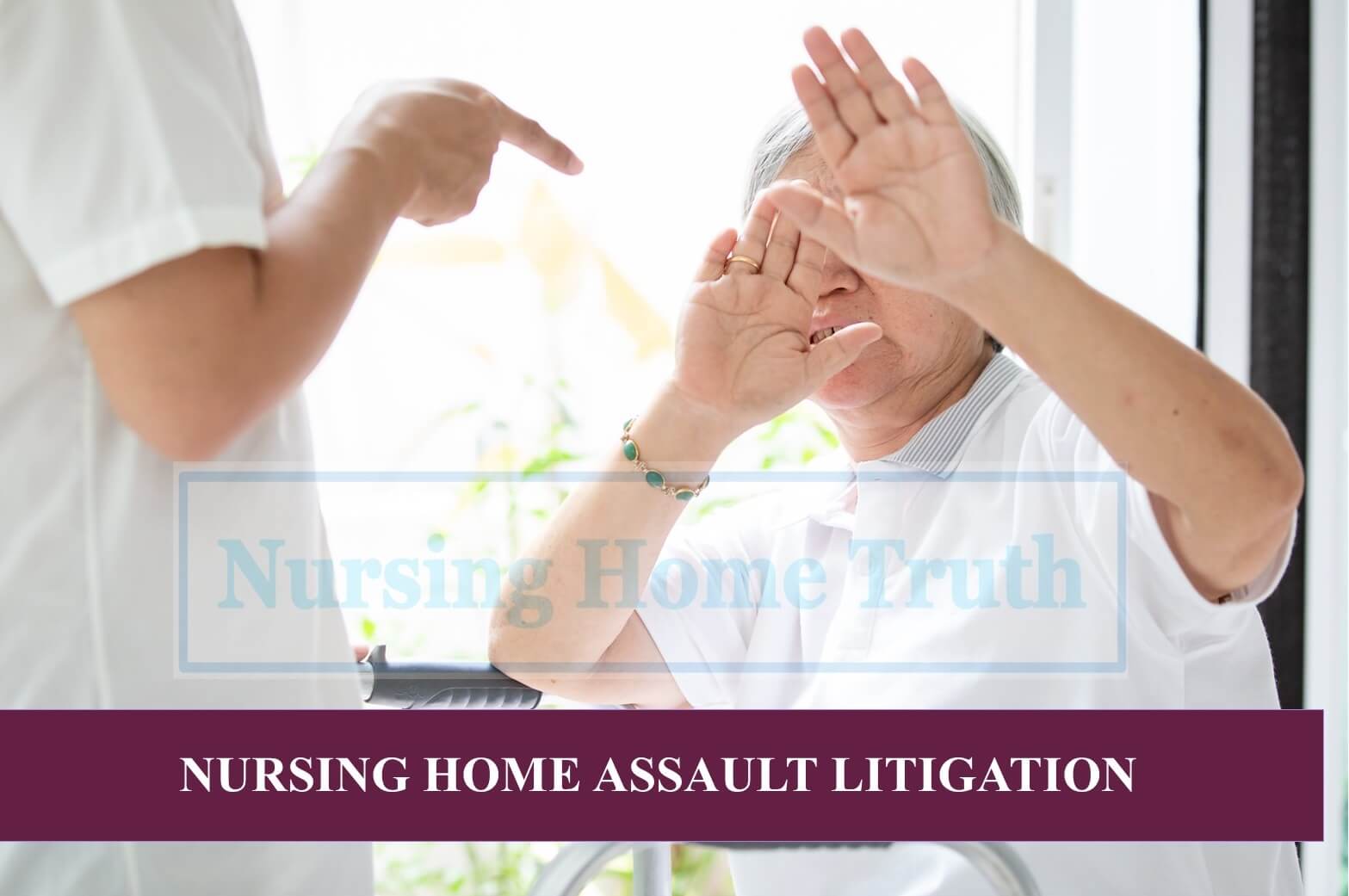 There is an assault on an elderly person every year in a nursing home, and it is happening at an alarming rate and in high numbers. (See, e.g., the abuse and neglect causes found in 2018 in a New Jersey nursing home).

Nursing home assault cases like this take place all over the country.  Both men and women are the victims, but statistically one common factor is the victim is an elderly person.

Researchers have found that both men and women are at high risk but that women seem to be at a more constant threat of assault.

Just recently an elderly resident was assaulted in a nursing home and even the person who saw it happen, chose not to report the incident, showing a systematic level of disregard and normalization of assault against nursing home residents.

Assaults in nursing homes include occur in the fully assisted care environments and the more independent assisted living facilities. This was the case when a man entered into an assisted living apartment and covered a woman’s mouth, making it difficult for her to breathe and the proceeded to assault her.

Nursing home assault cases like this most often include participation by employees who should be protecting residents. A 33 year old male caretaker in California assaulted an 87 year old woman with dementia in his care at a Los Angeles care facility.

This leaves family helpless to protect their loved ones. This was the case when an 83-year old woman was assaulted in a nursing home while her son watched it unfold on camera. The son had placed a camera to be able to monitor his mothers health, and was horrified when he saw an employee demean his mentally impaired and helpless mother. 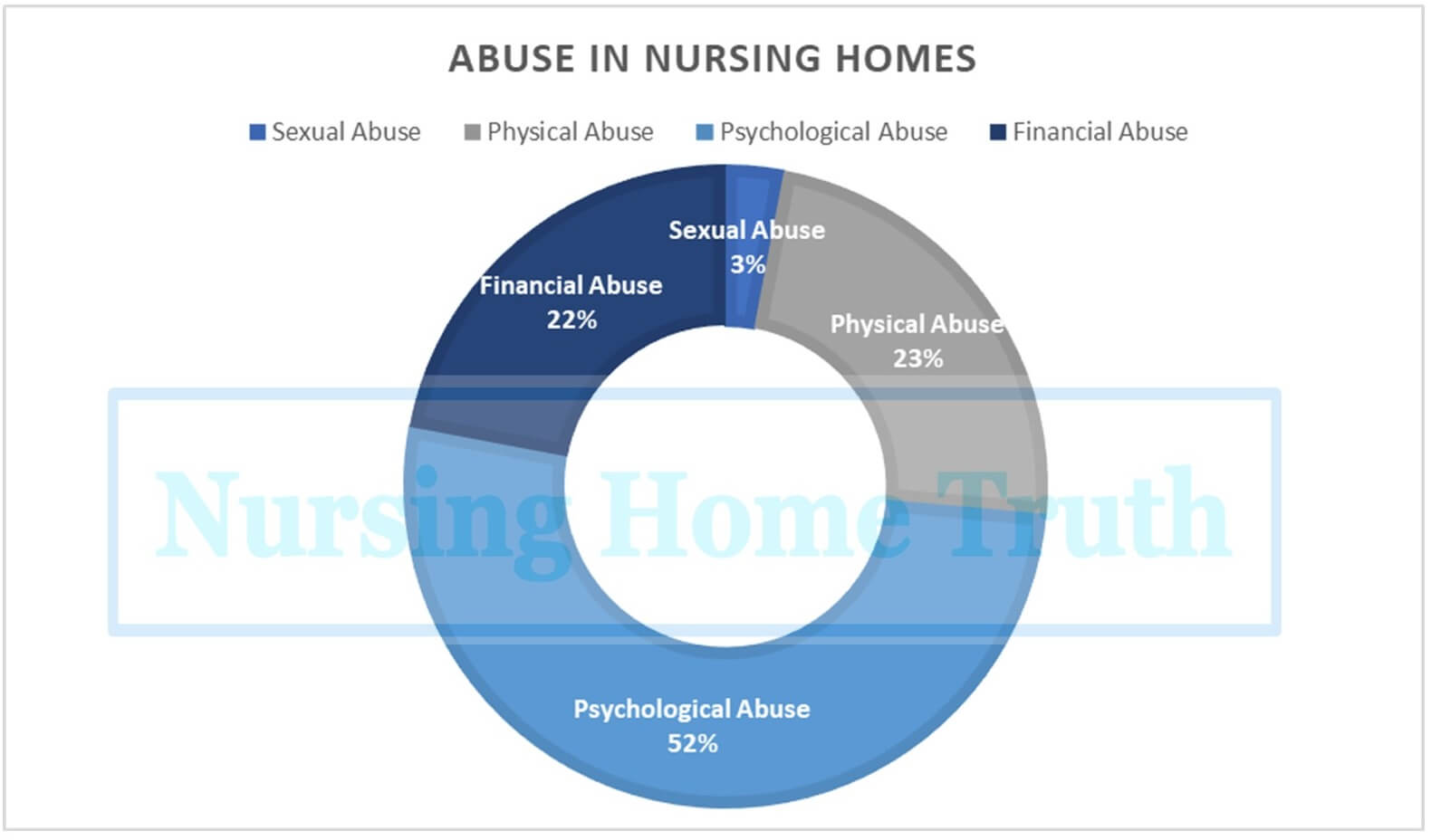 An elderly woman is assaulted in a nursing home more frequently than many would suspect.

Some assault types are more common than others such as physical and psychological abuse.

As can be seen in this chart, psychological abuse makes up the majority of assaults in nursing homes.  But look at the full graph, there are plenty of instances of women beat in nursing homes, too.

The different types of assaults go hand in hand with each other, as one (psychological) often precedes the other (physical).

Where there is psychological abuse, there is also often physical abuse, and fear on the part of the elderly residents to voice their fears and concerns.

This makes knowing the full extent of physical and sexual abuse assaults in nursing homes difficult.  Victims may not speak up because the abuser and assailant is still in a position of control and oversight over the victim.

Nursing Home Assault Investigations by a Lawyer in Baltimore Maryland

If you are dealing with this issue, do not deal with it alone.  I am here for you.

Call, email, or fill out the contact form below to get professional legal help from a dedicated nursing home abuse lawyer.

As the victim of a nursing home assault, I appreciate that these are difficult times for you.  I encourage you to stay strong.  Your perseverance will prevail.

Nursing Home Assault Lawyer Near You in Maryland & Beyond