What Causes Some Caretakers to Abuse their Elderly Charges

What Causes Some Caretakers to Abuse their Elderly Charges

There are a lot of reasons why nurses and caretakers abuse their elderly charges.  I find that in may instances, it’s not their faults.  It’s the fault of their employer – the nursing home or hospital they work for.

Nursing homes and hospitals often setup their employees for failure by not providing them enough resources.  And when things go south, guess what those facilities argue?

You guessed it, they blame the employee and say “this is just a bad apple.”  When the truth is, the employer put the caretaker in a position to fail, and a position that was foreseeable would result in abuse or disregard of the nurse’s elderly charges.

Continue reading to learn more about this issue.  If someone you know was hurt in a nursing home or hospital, I invite you to contact me for a FREE consultation and legal help.

1 – What Is Involved In A Caretaking Job?

2 – What Causes Some Caretakers To Abuse Their Elderly Charges

3 – The Impact Of Stress On Abuse

7 – Get Help With Your Caretaker Abuse Case

What Is Involved In A Caretaking Job?

Being a caretaker for an elderly patients is a hard job that requires multitasking, compassion, reliability and organization.

On a typical day, an individual who is a caregiver will help with their medications, getting dressed, going to the restroom, taking a shower, help with their grooming needs, and help with food. 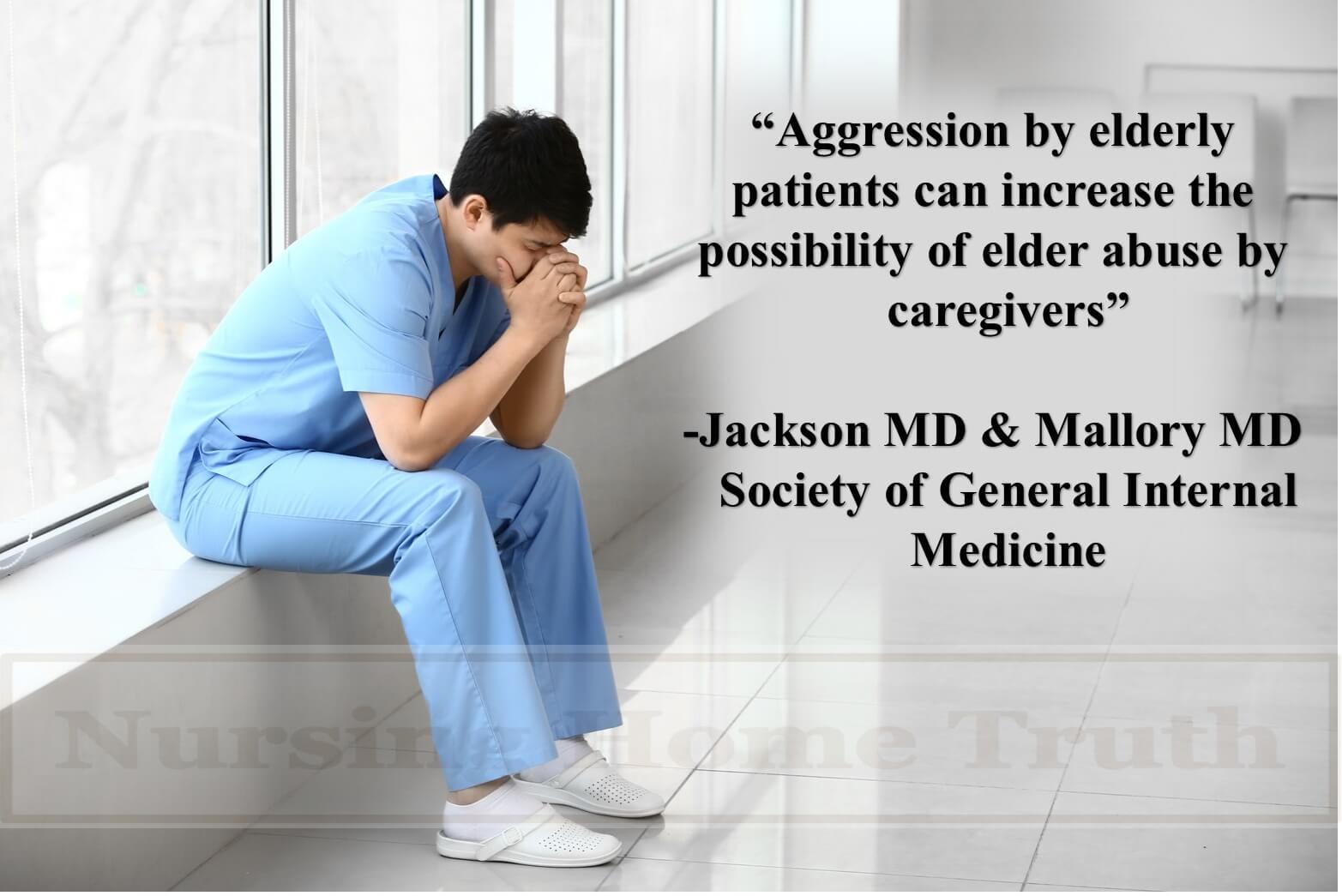 A caretaker can work in many different settings ranging from within the elderly person’s own home, in an assisted living facility or a nursing home.

The job often asks that the person applying be trustworthy, patient, dedicated, flexible and empathetic.

All of this and much more is needed because an elderly person may have a variety of physical, emotional and psychological needs that makes caring for them extremely difficult and stressful.

The more stress the caretaker has, the higher the chances are that abuse can take place.

What causes this stress can range from the caretaker’s own emotional state, to the presence of specific medical conditions, such as dementia or aggression.

What Causes Some Caretakers To Abuse Their Elderly Charges?

There is no single answer that covers this question, but rather, multiple possible answers are all possible at once.

What causes some caretakers to abuse their elderly charges can vary depending on the responsibilities at hand.

One example of this is the finding that there is a higher level of verbal abuse caused by caregivers of older patients who have dementia.

Other causes can be from nursing homes or home caretaker companies who have questionable hiring practices.  When unqualified people are placed into sensitive positions around the elderly, any existing problems they have can lead to abuse.

Significant associations have been found between carers who verbally abuse their patients and psychological ill health that the caretaker has themselves.

Employees who are charged with the care of the elderly who expressed high levels of emotions were also found to have high correlation to all types of abuse against the elderly.

The Impact Of Stress On Abuse

Stress in a caretaker has been identified as one of the biggest possible threats to an elderly person in their charge.

The more anxious and depressed a caretaker is reported to be, the more reported more abuse there is against the elderly individual.

There are ways to mediate this problem, like using coping strategies to deal with stress, but nonetheless, the correlation has been made clear with multiple research studies.

The probability of the stress causing abuse increases when the caretaker:

◊   The Caretaker Has Higher Burden Placed On Them

Stress in a caretaker is therefore one of the highest predicting variables that abuse will take place against the elderly person in their charge.

Another major predictive factor that abuse will occur is when a caretaker is overworked.

Multiple government and research reports and studies have found direct links between abuse being caused by both understaffing and employees being overworked.

Many nursing home patients are struggling with getting abused in situations that are wholly avoidable with better staffing and scheduling practices.

The combination of understaffing in a facility and the lack of education about aggressive patients coupled together helps to create a perfect storm that makes abuse highly probable and almost inevitable.

In understaffing situations, a facility or company runs low on available staff and leaves fewer people to work longer shifts, care for more people and become mentally burned out.

Under conditions like this, stress is increased, and it has already been shown that increased stress means increased chances for abuse by caretakers of the elderly.

This problem has become such a large problem that the issue of nursing homes being understaffed has even come under the scrutiny of the federal government because the relationship between the two is so strong.

The most damming part of these influences on abuse is that the problem is one that can easily be avoided with better hiring, training and education of staff as well as better scheduling practices so that no one caretaker is pushed past their point of comfort.

Sometimes the case of abuse against the elderly person is not the full direct negligence of the caretaker’s hiring organization.

Often times the caretaker themselves have mental health concerns and problems that lead to higher rates of abuse. 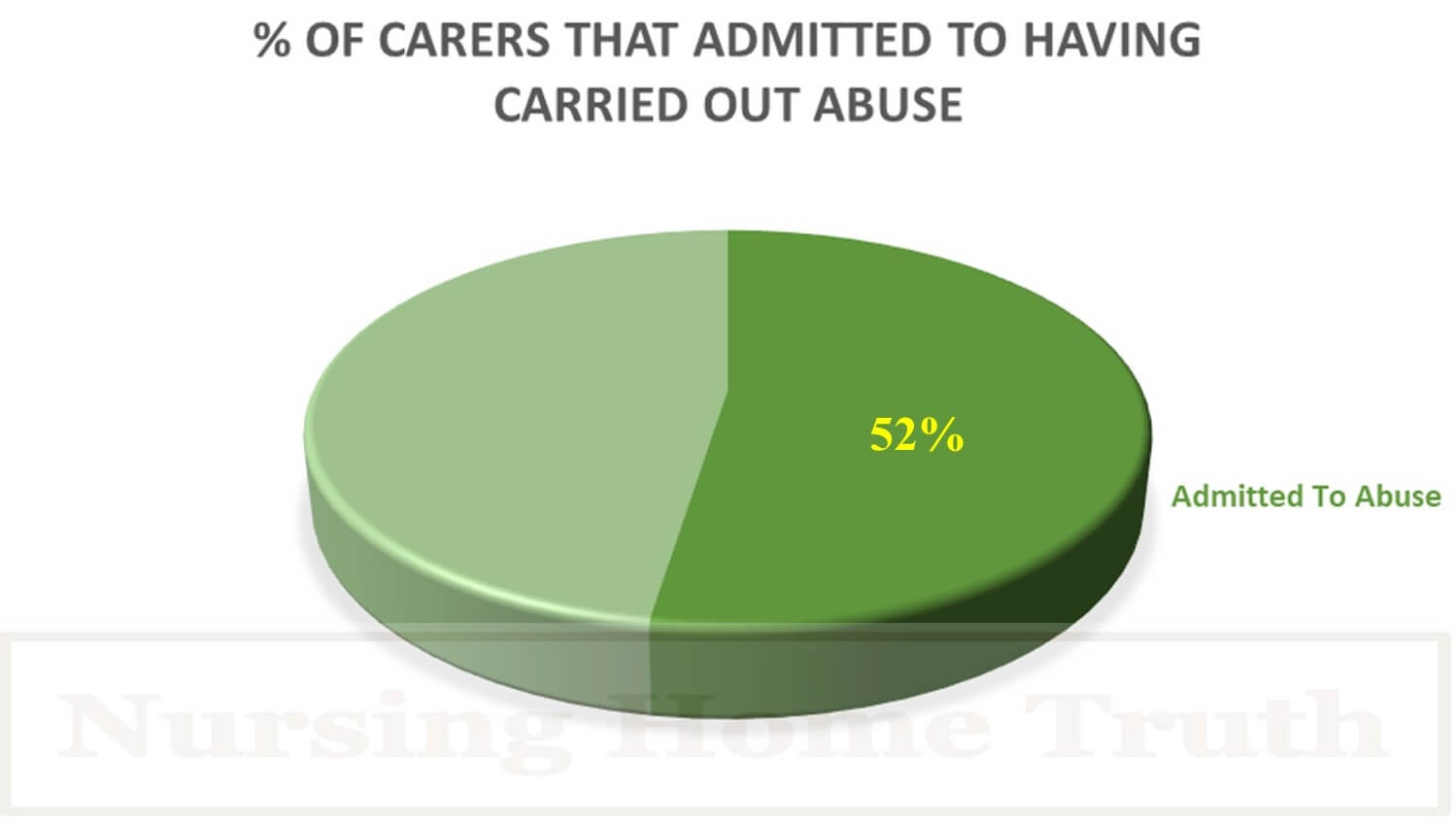 52% of caretakers have admitted to abusing patients who they were charged to care for.

Of those caretakers, 51% admitted to verbal abuse, while another 20% admitted to physical abuse and 4% to neglect abuse.

The most significant association found between a large portion of the abuse and the caretaker was the psychological ill health found in the caretaker.

Increased stress in the caregiver itself is often caused by a combination of factors such as:

Difficult patients and those who need higher than usual care and attention are another reason that caretakers abuse their elderly charges.

A high level of patience and resources as well as education are needed for a caretaker to properly deal with patients who have aggression and are in need of intensive care.

Dementia is a common condition that the elderly who have a caretaker have and researchers have found that up to 96% of patients with dementia demonstrated aggressive behavior over the course of their illness.

Many researchers therefore believe that what causes some caretakers to abuse their elderly charges is linked directly to the presence of aggression in the elderly individual.

While it may not be absolute that there is always a connection, aggression by elderly patients can produce at least in some cases increased stress and increase the possibility that this stress will lead to abuse on the part of the caregiver.

The major connection here is the stress because the aggression by the elderly individual causes increased stress and this increased stress can increase the possibility of provoking elder abuse of the patient by the caregiver.

Get Help With Your Caretaker Abuse Case

If an elderly person you know is potentially being abused by their caretaker, you should seek immediate legal intervention.

If the caretaker is a for-hire nurse or other healthcare entity, the victim of abuse could reasonably recover with a civil settlement for the abuse they have suffered.

For a free consultation or to learn what options you have, message me via the contact form below, or call or email me via my information at the bottom of this page.

Cooney, C., Howard, R., & Lawlor, B. (2006). Abuse of vulnerable people with dementia by their carers: can we identify those most at risk?. International Journal of Geriatric Psychiatry: A journal of the psychiatry of late life and allied sciences, 21(6), 564-571.