Roughly two-thirds of my nursing home clients have a bed sore claim.

Having reviewed 100+ bed sore claims, I can say with confidence that bedsores are almost always the result of neglect.

To emphasize, I said “almost always.”  I have to dig into the medical records to answer if bedsores is neglect for a specific case.

If you’d like my help obtaining, reading and interpreting you or loved ones medical records to evaluate bed sore claims that you have, send me an email or submit the contact form below.

Or, just keep reading to learn more about bed sore claims and neglect.

6 – Is Bedsores Neglect if it’s A Stage I-II Sore?

What is a Bed Sore Claim

Bedsores are serious medical conditions that can cause infection, pain and even death in serious cases.  The way that most people get bedsores ties into why bedsores are proof of neglect.

Bed sore claims are tied to issues of causation, which include neglect on the part of medical providers who fail to follow proper procedures when giving care to those who are bedridden.

Bedsores themselves can develop from things such as poor nutrition, poor post-operative care, and failure to move an individual who is bedridden enough throughout the day.

Failure to move a patient regularly will cause that patient to develop bedsores, or pressure sores, on the parts of the body that are pressed against the bed or chair for extended period of time, deteriorating the skin and leaving open wounds that are painful and dangerous.

In short, and said simply a bedsore claim attempts to recover a financial reimbursement for the bedsore that developed due to some form of medical malpractice.

Yes, a bedsore is neglect in many cases, but there are also demographic and personal health variables that can increase the chances of bedsores forming.

Nutrition Can Cause Bedsores

Nutrition is a vital factor and an important one to understand within the context of bedsore claims because factors like being overweight or having a poor diet can make a person more susceptible to bedsores.

Once bed sores have developed, nutrition will become incredibly important in how fast you heal from them.  Your body needs specific nutrients to heal, and if you’re not being provided those nutrients that is a form of medical malpractice.

Prior Health Affects Your Bedsore Claims

Your existing health will affect your bedsore claims because weight loss and gain, poor diet, and obesity are all things that increase bedsores.

How does this affect your bedsore claim?

When there are factors like this at play, there is a higher chance that it will be used to deny a claim against you by arguing it was not poor care, but your own inevitable health issues that caused your bedsores.

Proving a bedsore claim case can be hard.  It will come down to physical evidence and documenting all of the neglect that was shown in your situation.

Get Evidence of The Bedsore

One of the first things you need to prove is the extent of the bedsore itself.

To do this you need to take photos of the bedsore.

Pictures of the bedsores will be one of the biggest parts of your claim because a picture is worth a thousand words and if I can show the jury what was done to you, you will get more complete justice.

What Stage Is Your Bedsore?

Bedsores come in stage I, II, III and IV and anything past stage I can be serious and shows that neglect has taken place.

In addition to the pictures and physical observations of bedsores and the stage the bedsore is, you can also use the care received as a part of your bed sore claim.

While in medical care, an individual who is bedridden or cannot move around on their own in a normal manner needs to be moved every 2 hours.

When this is not done, the chances of a bedsore forming is substantial.

There are rules in care that dictate that a person needs to be moved to prevent a bedsore.

When this does not happen neglect has taken place and this can help prove and increase the strength of your bedsore claims.

If you have suffered a bedsore, or someone you love has, you are eligible to recover a bedsore claim that compensates for your pain, suffering, medical bills and more.

A bedsore is not a small or insignificant thing.  These wounds are serious and can be emotionally and physically damaging.

A bedsore has a strong odor that is the actual smell of your own flesh rotting. Smelling yourself die is a high level of suffering and emotional trauma to deal with.

You can get monetary compensation for that suffering.

The damage is not only emotional, there are also physical pains that you will suffer during the development of and the recovery process of a bedsore.

This pain is intense and can become consuming and distract you from taking part in even small tasks.

The treatment process for managing bedsoers is long and arduous and will involve long-term care.

In addition to the present treatment, you will need future treatment which only ensures that your pain and suffering and medical bills will continue to grow.

All of this can and should be recovered for as damages in your bedsore claims.

Is A Bedsore Neglect?

Put simply, bedsores can be considered neglect or they can also be considered a normal part of medical treatment, aging and post-illness care.

The deciding factor will depend on the care you received or did not receive.

Can Bedsores Be Prevented?

While you are in the care of medical professionals, it is their job to ensure that you do not develop bedsores.

In some cases, this is not possible, such as when a person is severely obese or cannot be moved safely.

Even in these cases, there are medical tools and technologies that can help reduce the chance of developing a bedsore which should be used to make sure a bedsore does not develop into stage II or higher.

Other common tools to help avoid and prevent a bedsore are best practices that medical professionals use to ensure these wounds do not develop.

The most common practice for this is to help the patient move every 2 hours so that they do not develop a bad sore.

When Is a Bedsore Neglect?

So when is a bedsore neglect?

It is neglect when best practices are not followed by medical professionals.

There include use of technologies and actions like moving the patient which can help prevent bedsores from forming.

When a nurse for example fails to move her patient every few hours, and the individual develops a bedsore, this is an example of neglect.

If a person is ignored, given slow care, or does not have early stage bedsores identified before they get past stage I, then there are higher chances of bedsore claims because neglect can be proven.

Is Bedsores Neglect if it’s a Stage I-II Sore? 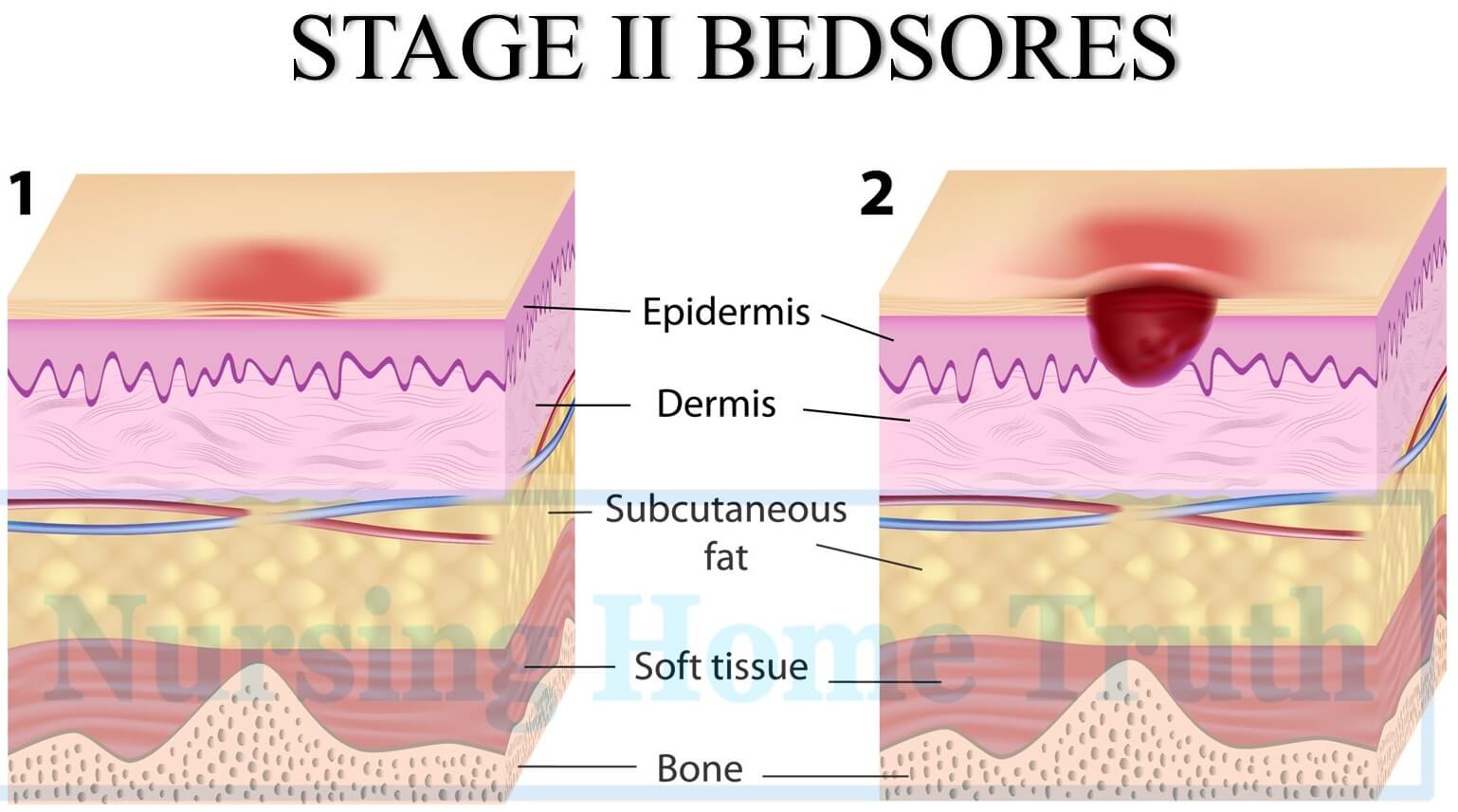 Bedsores come in multiple stages.  The higher the stage, the more advanced the bedsore and the more serious the condition.

Any bedsore is neglect if the reason for the bedsore is tied into poor care, negligence, or wanton disregard on the part of those who are responsible for the health and well-being of the patient.

There is no reason to outright believe that stage II cases are more likely to end in a bedsore claim just because they are a stage II case.

The higher the stage, the longer the neglect can be assumed to have taken place because it takes time to devolve from a stage I all the way to a stage III or IV.

Higher bedsore stages are more likely to result in a bedsore claim of high value and can be easier to prove.

This does not mean that stage I cases are not neglect, it only means that higher stage cases are easier to prove and worth more.

While a stage II or higher bedsore may be easier to prove a bedsore claim with, even a stage I bedsore case can result in a valid bedsore claim assuming you can prove that nurses did not do their jobs in turning and repositioning you every 2 hours while in bed and once every hour when seated.

If a stage I bedsore has developed, it already shows that some neglect was present.

If adequate care is not given, like ensuring proper hydration, proper balanced nutrition, changing diapers frequently and moving the individual consistently, the stage I bedsore will develop into a stage II or higher which only increases the level of neglect.

Are grade I bedsores considered neglect?

Yes, even grade I bedsores are neglect.  What makes a bedsore case neglect is less about the grade of the bedsore and more about the care that was or was not given to the individual who suffered the bedsore which ultimately caused that sore to develop.

Can a bedsore be prevented?

What is the best way to prove my bedsore claim?

The best way to prove your bedsore claim is to make sure you get and save all evidence related to your injuries.  You also need to make sure you document all of the medical care that was or was not given to the individual who suffered the bedsore.  This is the evidence that can show that neglect was present and led to the bedsore developing.

What role does nutrition play in a bedsore case?

The trick with bedsore claims is to not lose for the forest for the trees.  There are usually bigger picture, systemic issues that caused the bed sore to happen.

When I uncover those systemic issues in the medical facility, it makes it easy to answer the question of, is bedsores neglect?  The answer is always a resounding, “yes.”

If you’d like me to investigate you and your family’s bed sore claims, call, email, or submit the contact form below to hop on a FREE call with me.

Bedsore Claims Lawyer Near You in Maryland & Beyond