New York bedsore claims have become almost as much of a pandemic as COVID.  On that issue, a lot of facilities in New York used and are using COVID as a cloak to stop caring, which is allowing bedsores to develop and progress to terrible stages.

Justice can be, and has been, obtained for these injuries.  I outline several New York bedsore settlements in my research below.

I hope this research helps you find justice, and purpose in pursuing your New York bedsore claims. 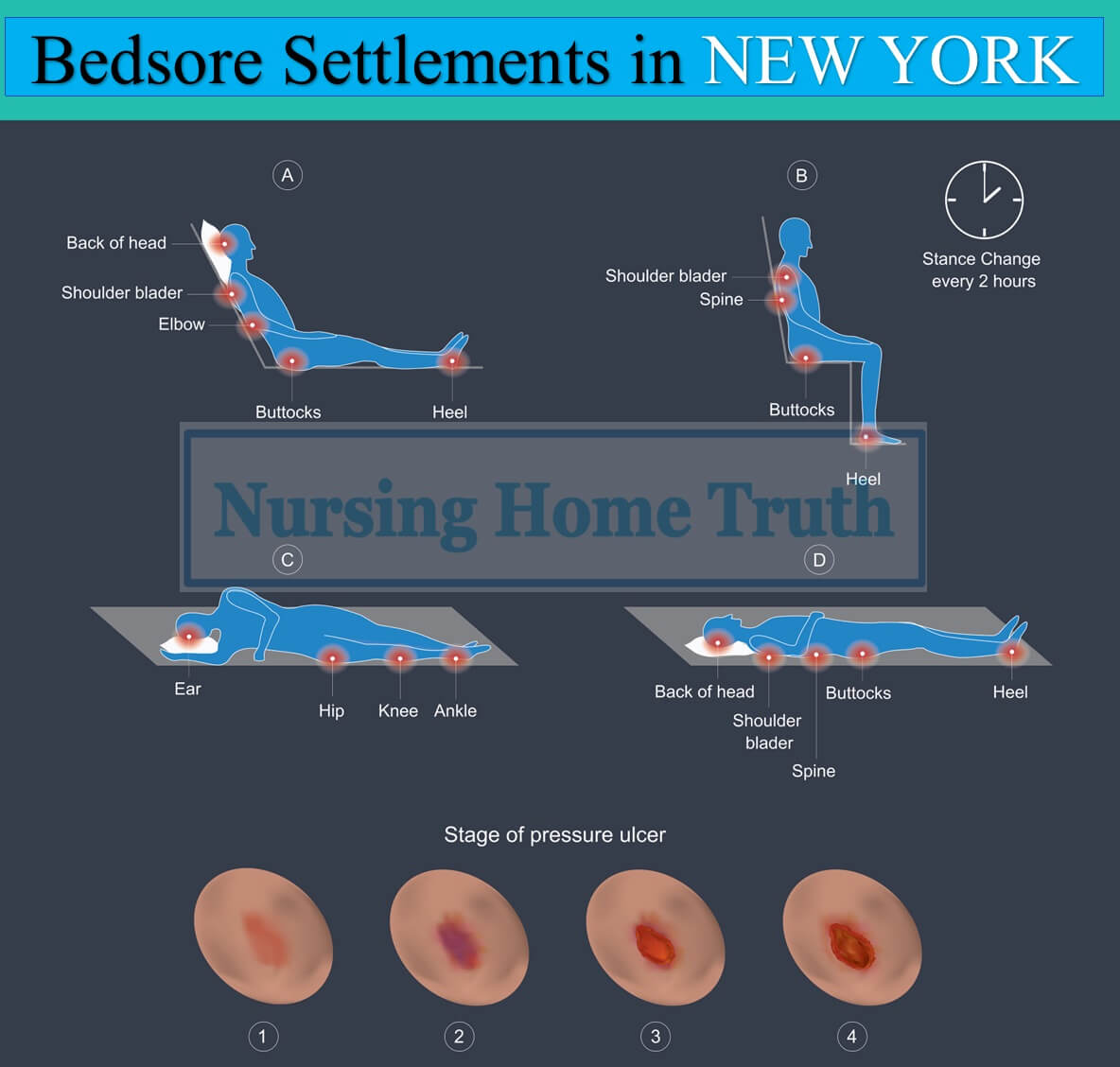 Nursing homes in New York have the responsibility to ensure safety, cleanliness and dignity for all residents.

While this is known and understood, in practice, too often the ball is dropped and your family members are the ones who are left to suffer.

What Are New York Bedsore Claims Based On?

Bedsore settlements in New York are based on claims that the medical facility at which the bedsore is acquired, including those providers’ employees and all medical providers who come into contact with you or your loved one, failed to move the patient frequently enough.

In order to ensure that an individual is able to get safe care, and to avoid the painful and debilitating condition of bed sores, a few practices have to be followed.

What are these basic best practices that nursing homes and hospitals need to follow?

Some of the most common ones to help avoid bedsore are below, and these are also the basis of a typical New York bedsore claim:

◊  Patients need to be moved every two hours at minimum

Was The New York Facility Negligent?

Failure to provide nutrition, hydration and failure to move the person in the bed constantly can result in bedsores, which are open ulcers that cause intense pain and also can get infected leading to further health complications.

These sores can show up on the tailbone, shoulders, elbows, and really any part of the body that there is pressure on for an extended period of time while laying on a bed.

If a bedsore has developed on any part of the body and basic prevention steps were not taken, chances are that the New York nursing home or medical facility was negligent.

If you find that the items above were ignored in your case, then there is a high possibility that not only was the nursing home, hospital, or medical facility was negligent, but it is equally likely that you have a good chance at obtaining a fair bedsore settlement from those negligent New York medical providers.

Bedsore settlements in New York do need to be pursued in a timely manner and it is for this reason that more often than not, they are started within 2-3 years of the event taking place so that personal injury and malpractice amounts can be recovered.

Many of these cases result in death. Examples of this are often seen in patients like a 67-year old male who was released from a hospital to the care of a nursing home for what was supposed to be 3-6 months of rehab. However, in this time period, the patient developed dehydration and bedsores which became infected and led to the patient having to go back to the hospital for surgery for the bedsores. This case led to a settlement between the New York nursing home and the patient in the amount of $678,000 because the nursing home was found to be negligent in its actions and care.

This is sadly not uncommon as was seen in the another case, this time involving an 82-year old female resident of a nursing home who was left in the same position for an extended period of time and not checked on or moved frequently enough, which led to the development of ulcers on the heels of her feet, her tailbone and her elbows. These became serious and infected which led to the death of the patient. The nursing home, as they often do, denied liability and stated the situation was not their fault. The payout for this New York bedsore claim was $4,871.000 to the patient’s family who brought suit for the death of their loved one.

I reviewed almost two dozen New York bedsore settlements to try and get an accurate average settlement and case value on these claims for you.

I’m summarizing all the cases I found here, but let’s look at a few more results so you understand my research and average has substantive foundation.

$812,750.00 (New York):  Bedsore settlements in New York are often high, and this is particularly true when it is evident that the nursing home clearly failed to address the basic health needs of the people they are meant to protect and help. This was the case of a 95-year old female nursing home resident who died because of some neglect. She suffered from pressure sores as well as malnutrition and dehydration when the nursing home that she was in the care of failed to address her basic needs. Her estate brought suit against the nursing home for their neglect as the bedsores led to serious additional health concerns that took her life.

$11,855,000.00 (New York):  A 73-year old female resident of a NY nursing home suffered multiple bedsores when the care home she was in failed to move her for extended periods of time. This negligence also included clear signs of dehydration and malnutrition which the family brought suit for stating that the situation was a clear case of neglect. The defendant stated that the bedsores and other conditions were not avoidable and therefore since there was no prevention that could have helped, there was no reason for them to be held accountable. Punitive damages were also awarded to the family of the decedent in this case.

$3,371,000.00 (New York):  While in the care of nursing home, a male resident who was 74 when he went into a nursing care facility, developed bedsores because he was not turned which lead to serious ulcers on the back. The ulcers were left for so long that they also became infected which caused intense pain and suffering for the patient which led to the need for long-term treatment including surgery for the infections and sores.

There were many smaller results that came up in my research, too.

I emphasize reported because it’s likely that smaller settlements are not reported, and the average is likely lower.

Notwithstanding that, these are real results extrapolated from thousands of cases and mathematically calculated to give you a genuine answer to the question of what the average bedsore settlement in New York might be.

How much is a bedsore lawsuit worth?

A bedsore lawsuit is worth around $1,225,000 based on the dozens of cases I found in my case research, but there are much larger lawsuit amounts when it’s a wrongful death bedsore case.

Can I sue for bed sores?

Yes, as I explained above in detail, you can sue for bedsores and based on my research many patients recovered over $1,000,000 when they sued for a claim of bed sores.

How long does it take to settle a bedsore lawsuit?

In terms of how long it takes to settle a bedsore lawsuit, when we’re talking about $1,000,000 recoveries like I outlined in this article, you should know it takes on average 2 1/2 to 3 years of fighting with insurance companies to settle bedsore lawsuits, and that remains true even when the claim is smaller.

What is a stage 4 bedsore?

To answer what is a stage 4 bedsore, you should know that’s the worst bedsore stage and is when the injured area is so badly damaged that a large wound is present and open in the flesh, often tunneling down to the bone, and these stage 4 bedsores are what lead to $1,000,000+ bedsore settlements like the one in this article above.

I have been reviewing new cases of New York bedsore malpractice claims almost every other week.

99% of these injuries are preventable, and should never happen.

It’s time to make these negligent facilities in New York care again by forcing fair bedsore settlements out of them.

But these are complex cases, you can’t do it alone.  Call a lawyer.  Get help.  Get justice.

Bedsore Malpractice Lawyer Near You in Maryland & Beyond