If someone you know in a nursing home has a DTI or suspected deep tissue injury, you should be very worried.

This is not only an early sign of neglect, but it’s the predecessor to a pressure wound.  In rapid fashion, and I’m talking within 3 weeks, a DTI can become fatal.

How do I know?  I’ve reviewed literally hundreds of thousands of nursing home medical records and chronicled wound onsets and progressions, and I almost always see early blisters and DTI wound evidence early in the nursing chart that the facility ignored.

Continue below to learn more about DTI wounds and suspected deep tissue injuries.  If you have more questions, call me for a free consultation.

6 – Get Help With Your DTI Wound Case

What Is A DTI Wound?

A deep tissue injury (DTI) is damage that has taken place at the deepest part of the muscle and bone area.  This kind of injury takes place in the tendons, muscles and protective layer that surrounds the joints and bones.

Unlike many injuries that have an open point of contact, like a cut or a gash, a DTI happens beneath the surface.  When tissue deep inside the body is harmed the resultant sore is called a DTI.

These injuries tend to cause symptoms like darkened skin which can become red or purple or develop blood blisters or contusions.

DTIs are common and are also on the rise. According to the AHRQ the incidence of DTIs have increased 80% between 1993 to 2006.

The first step to treating a DTI is detecting one in the first place. A DTI occurs as an injury, like an ulcer, deteriorates towards the superficial skin, finally making it visible. 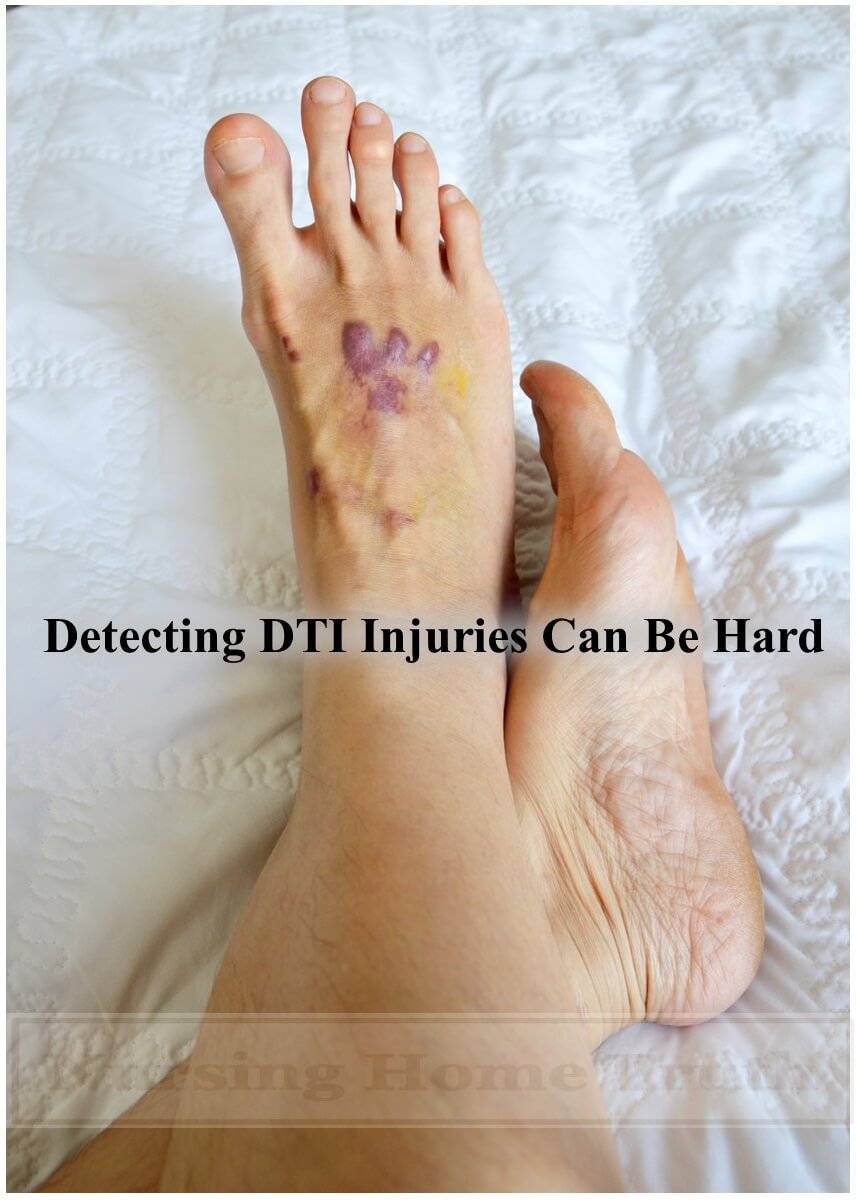 The main problem with a DTI treatment plan is that they are delayed because these injuries are difficult to detect in a timely manner.

Often, these injuries are not detected until they have reached stage III or IV wound, making them a much harder to treat and dangerous condition.

As visual assessments are not plausible for early DTI detection, special testing would be needed to catch this injury early on.

One such method can be to look for the chemicals that are found in the body of an individual who potentially has a DTI.

Since a DTI begins in the muscle tissue, specific enzymes that are found in muscle tissue could help with this detection.

Examples of this are Creatine phosphokinase (CPK) which is a skeletal muscle enzyme that happens to be very sensitive to muscle damage and when there is injury can be found in much higher levels that usual.

CPK as well as other intracellular enzymes leak in larger amounts into your extracellular space which can be detected with bloodwork and help indicate a DTI early on.

Caring for a DTI wound requires constant care and early detection.  A DTI injury start to turn purple or maroon within 24–48 hours after the injury onset and the separation of the epidermis.

Before that happens the skin can start to become dry and also warm to the touch.

There can also be  24–72 hours between the DTI wound presenting itself and the original injury although the most common timeframe is 48 hours.

◊ The treatment for a DTI should be constant care which includes:

The problem with DTI wounds is not only that detection is hard, but also that many healthcare workers and nurses are not experienced in the detection or the treatment of the injuries.

Studies have found that nurses’ knowledge, both in prevention and management of DTIs, is not  effective in many cases.

How Long Does A DTI Wound Take To Heal?

The process towards recovery can take anywhere from 2 months to well over 12 months.

Tissue this deep in the body cannot heal easily or quickly and in order to be fully restored, more than anything, time is needed.

The exact time range will depend on which stage the DTI is in.  A DTI that festers to a stage I-II wound can take as short as a few weeks to a few short month.

A stage III or IV can on the other hand take months and in serious cases, can even take years to properly heal.

DTI cases are increasingly likely to be treated harshly by insurance companies as they have a get tough strategy for handling these types of claims.  This strategy is meant to help deny as many DTI claims as possible and to limit your options in settlement values.

Even if you think your case is clear and undeniable, you will face an insurance company that is highly determined to offer you a low initial settlement and then stagnate it at that rate with threats of not settlement if you refuse to play by their rules.

Settlements often are pushed into expensive and time-consuming trials when there it no attorney to help you stand your ground in the settlement process early on.

Establishing liability is an important part of a DTI settlement.  One way to establish liability is to show that there was neglect in treatment and that the injury was preventable.

There is a high prevalence of poor care in cases of DTIs which means that many of these injuries could have been prevented. 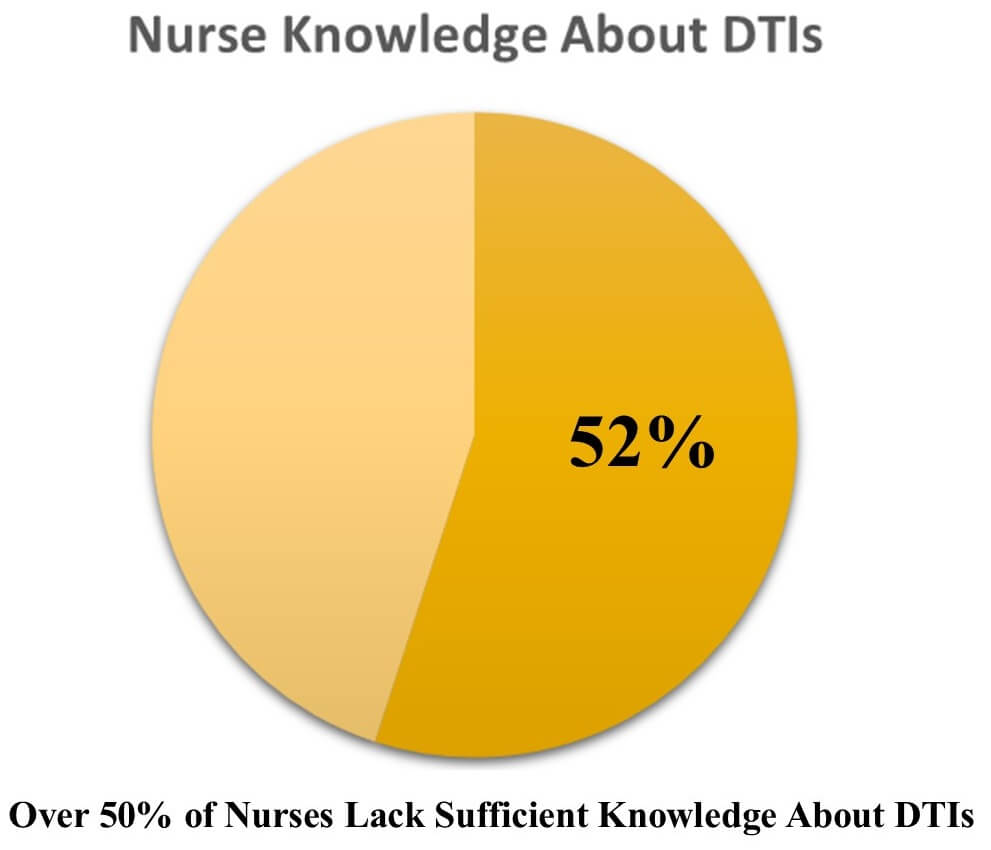 One comprehensive study across nurses in departments of neurology, orthopedics, physiotherapy, rehabilitation, and intensive care units in 3 different hospitals showed a high rate of insuffient knowledge on DTI care.

Even in hospital departments that frequently treat patients at high risk for developing DTIs a sample of 243 nurses shows that over 50% of nurses lacked sufficient knowledge about DTIs.

While DTIs are difficult to detect in the early phase, which can slow down proper treatment, even when they are detected nurses often lack the knowledge needed to provide adequate care.

Proving this can help your settlement value as it shows that you were treated in a negligent manner and your injury progression could have been prevented.

Many insurance companies use a computer-generated offer for the initial value that they will give you for your DTI injury.

This initial offer is frequently set and then not moved as adjusters are told not to offer any money past this initial amount.

One of the many problems that come with this system is that the inflexible initial offer fails to account for future medical expenses or medical complications that can occur from a DTI.

When you get the initial offer from the insurance company, make sure you keep this in mind because the expenses that you incur now are only the start of your potential causes.

A DTI wound that leads to serious infections and also requires time in the hospital can settle anywhere from $150,000 to well over $500,000 or even more.  I must emphasize this is for DTI wounds that progress to stage III to IV wounds.

How Long Does a DTI Wound Case Take?

DTI wound cases can take anywhere from 2 to 3 years to settle.

Many cases however, take longer, this is even true in cases where the injury is a straightforward one.

Will my DTI wound case take longer than a year to settle?

DTI cases can take on average between a year which means that there is a high chance that your cases can also take a year. Some cases settle as fast as 5-8 months while other cases take as long as 1-3 years to settle.

How common are DTI injury cases?

DTI injuries are very common and over the last two decades they have risen over 80%.

Deep tissue injury treatments that are a part of long-term care can add value to your settlement due to the additional pain and suffering that comes with these extended treatments.

Should I accept the insurance company’s initial offer to settle?

No, you should never accept the initial offer to settle as this is usually a lowball offer that will not include considerations of your long-term care needs and future damages related to your DTI injury.  Ideally you should speak to an attorney before making any decisions on an insurance company’s offer.

Get Help With Your DTI Wound Case

As you have learned from the information above, a DTI case can be a long and drawn out process in which the insurance company will try to get you to settle for a value that does not compensate you fairly.

What you need in your corner is someone with experience dealing with DTI cases like yours.  Having that experience, I will say that DTI injuries are only worth pursuing if they persist to something more substantial, such as a stage III or IV pressure wound.  Otherwise, the value of the claim will not justify the massive expense of a medical malpractice lawsuit.

I am here to help guide you with a free consultation.  Call, email, or fill out the contact form below for help.

Aydin, A. K., & Karadag, A. (2010). Assessment of nurses’ knowledge and practice in prevention and management of deep tissue injury and stage I pressure ulcer. Journal of Wound Ostomy & Continence Nursing, 37(5), 487-494.