Due to continence issues, many nursing home residents wear diapers.  So the questions arise:

◊   How often should nursing home residents’ diapers be changed?

Below, you will learn how diaper changes in a nursing home setting can be evidence of neglect and violations of proper medical standards.

If you have more questions or need help after reading this article, contact me day or night.

3 – So, How Often Should Nursing Homes Change Diapers?

5 – Consequences When Diapers Are Not Changed

The Need for Nursing Home Diapers

In nursing homes, many individuals will need to wear diapers because of mobility issues and concerns.

Because many who live in a nursing home are not able to get up, stand up, or move around at all, they will have a diaper put on in order to address their bathroom needs.

Those who are bedridden on the other hand, or have cognitive health deterioration that prevents them from being able to control or express any need to use the bathroom, will almost always have to wear diapers at all times. 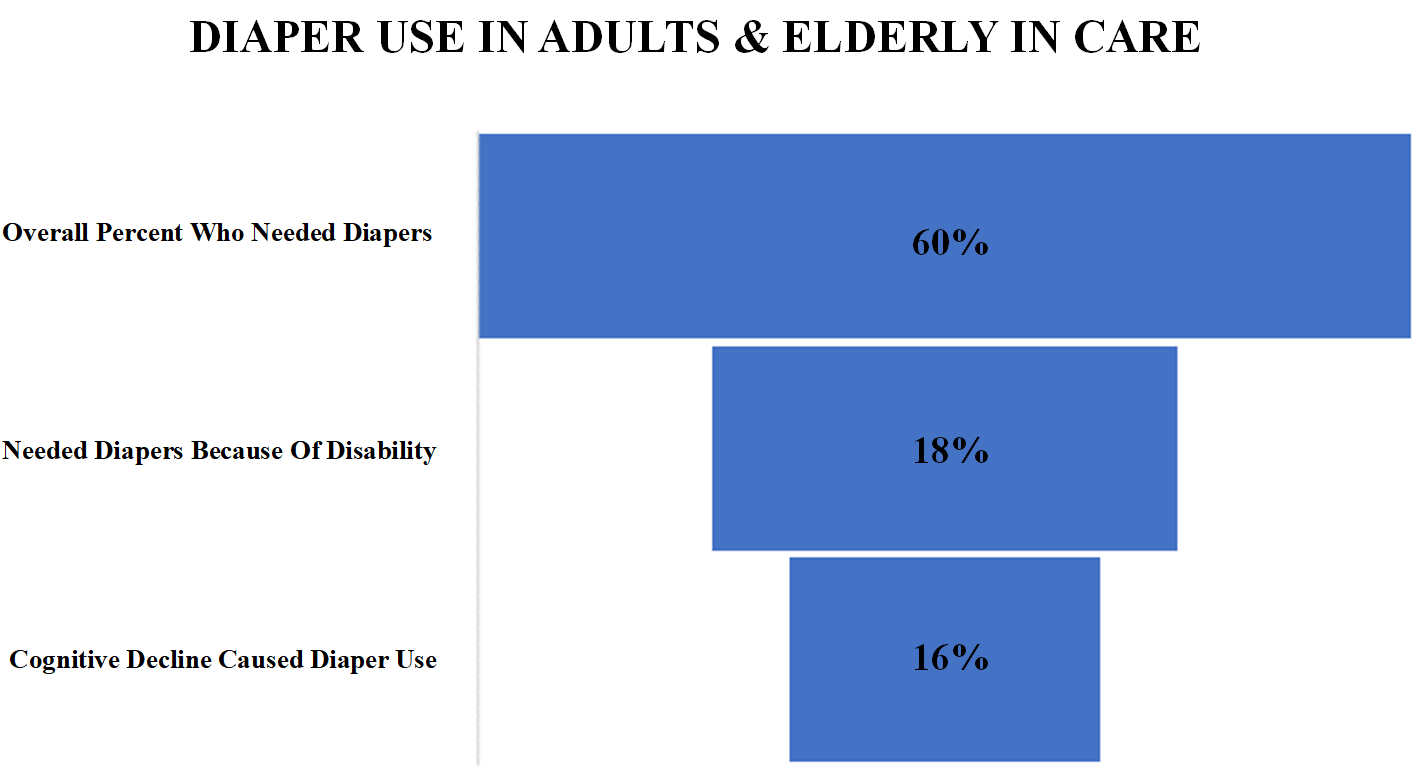 When an individual is bedridden, be it in a hospital or nursing home the need for diapers increases exponentially with many elderly in hospital care and long-term care needing diapers because of disability or cognitive decline.

Sine this is such a common occurrence, with a large majority of elderly and adults in care needing diapers at some point and time, the question then is, how often should nursing homes change diapers?

The Answer to this can vary on a number of details, but there are some overarching rules that nursing homes should generally be following in order to give their patients the best level of overall care.

The answer to the question of how often nursing homes should change diapers is, it depends.

If a person has incontinence then their diaper needs to be changed far more frequently than a person who does not have any such problems. Usually, those with urinary incontinence will need to have their diaper changed at least 5-8 times in a day.

This does not mean that all incontinence is even treated the same.  An individual with bowel incontinence needs to have their diaper changed immediately upon the diaper becoming soiled.

The biggest factor in the need for frequency in changing a diaper will be how healthy and active the lifestyle of the individual wearing diapers is.

A person who can usually get up and go to the bathroom themselves will not need to change their diaper as frequently because most of the time they will not actually use the diaper. This means that a person who has incontinence or bladder leakage can generally not need their diaper changed multiple times in a day.

Additionally, a person with this level of care needed may often not even know that they need to relieve themselves or that they have already relieved themselves.

These individuals will need to have their diapers changed far more frequently and will need to also be monitored carefully as well.

So, How Often Should Nursing Homes Change Diapers?

The answer to this question depends on which class or category of individual you are in a nursing home.

The individuals who have bladder concerns and cannot always control or time their needs will have their diapers changed less frequently, usually once every few hours throughout the day.  These are individuals who can usually voice their needs to go to the bathroom, but not all of the time.

A person who is bedridden needs to have their diaper changed every 2-3 hours when they have urinary incontinence.  However, if an individual who is bedridden soils themselves they need to be changed as soon as possible as this can be harmful for them in the long run.

Similar to those who are bedridden, a person with cognitive decline needs to have their diaper changed every 2-3 hours for urinary incontinence but ASAP when they have soiled themselves, otherwise major health problems can arise related to their skin.

There is often neglect in nursing homes with regards to changing diapers in a timely manner.

Residents who cannot move or have cognitive concerns are often left with soiled or wet diapers for long periods of time which can cause health problems.

Unnecessary suffering is caused when this basic need is neglected that weighs on the emotional and physical well-being of nursing home residents.

This kind of neglect is therefore a form of abuse that many in nursing homes suffer through.

It is not always disregard for a resident that leads to diapers not being changed.  Instead, it can often be the fault of the nursing home itself because of a lack of support and poor training that leads to unclear routines for nursing staff.

This lack of training and routine complicates the question of how often a nursing home should change diapers.

This is because even if it is done every 2-3 hours, if it is not done correctly, it is the same as not doing it at all.

Inadequate care like not changing diapers properly or frequently enough has a direct impact on health and safety outcomes for nursing home residents.  It is, for certain, one of the things I investigate when I learn an elderly nursing home resident suffered a pressure wound.

Consequences When Diapers Are Not Changed

Complications & consequences come up frequently when a nursing home does not do its job properly for residents.

When a diaper is not changed in the proper manner, many health conditions can arise.  This includes:

These conditions can degrade quality of life and in some cases even shorten life.  They should be monitored closely by nursing, and by family members who want to make sure nurses and nursing homes are doing their jobs.

This is one of those bad nursing home acts for which filing a lawsuit does not make sense.

The only time that changes is if the inadequate diaper changes caused a serious pressure ulcer injury.  If that happened, you need an experienced pressure wound lawyer.

Contact me for a free consult on how I can become your advocate.  My information is at the bottom of this page.