Immobile Patients Are Most Susceptible to the Following Risks

Immobile Patients Are Most Susceptible to The Following Risks

Immobile patients are most susceptible to:

You will learn the basics about each of these vulnerabilities below.

If you or someone you know suffered a different type of injury while being immobile or bed-bound, contact me for a free telephone consult about whether that injury is indicative of medical negligence.

1 – Immobile Patient is Susceptible to Wounds

3 – Immobile Patient is Susceptible to Atrophy

4 – Immobile Patient is Susceptible to Depression

5 – Immobile Patient is Susceptible to Neglect

Immobile Patient is Susceptible to Wounds

An immobile patient is most susceptible to the following kinds of skin wounds and conditions when they are immobile:

The major reason for these skin afflictions is immobility.  Immobility is the inability of an individual to access and use their body because of weakness in the muscles, broken or missing limbs, or disability.

Wounds are a major concern for those who are immobile and when they are not cared for carefully, their conditions can deteriorate and cause serious injury or death.

Immobile patients are also often at risk of excessive and unhealthy weigh loss.  The reason for this is mainly steeped in the fact that a person who is bedridden or cannot move freely is reliant on other people for feedings.

A person who is immobile will lose tone in their skeletal muscles over time because the bones no longer bear any weight in a normal manner. The result of this is a serious reduction in muscle mass as they shrivel and dwindle from lack of use.

This loss of muscle tone loss and skeletal muscle weakening also causes the patient to lose strength every week which further increases the chances of further weight loss. 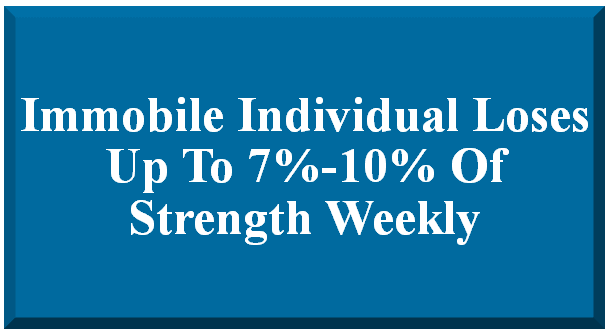 If this is also accompanied with any loss of fat, there will be weight loss that can alter the normal weight of an immobile individual and make them more susceptible to health concerns that come with weight loss.

Fat loss often does accompany this skeletal muscle tone loss as the immobile individual will often have an inadequate intake of needed nutrients leading to weight loss.

When an individual does not move for a long period of time, not only do they lose muscle strength and tone, they also develop a stiffening of their muscles.

Atrophy and contracture both occur often in those who are immobile for an extended period of time.

When the muscle mass starts to reduce and waste away, the affected area begins to reduce in size and shrivel making it harder to use these muscles in the future.

A common occurrence that comes at the same time in the body is a contracture, where the body starts to not only lose mass and get smaller but also the muscles tighten and become stiff.

Contracture starts to develop in as short as 4 days and range of motion starts to get lost in 14-15 days.

Elderly patients are at a much higher risk of these conditions as there are higher rates of them being immobile and spending long periods of time in nursing homes and hospitals.

Immobile Patient is Susceptible to Depression

Patients who are immobile are at high risk of emotional, psychological and nervous system problems.  Loss of independence and change in lifestyle results in the individual being faced with a whole new direction and reality which can be hard to deal with and adjust to.

These adjustments require changes in almost all parts of life, ranging from eating habits, socialization and even sleep patterns.

An immobile patient is most susceptible to the following emotional and psychological conditions:

These conditions arise from a lack of simulation and the overall social isolation that a person goes through.

The change in body image and feeling helpless and hopeless also add to the increased risk of depression.

Sleep schedules also change as individuals are often not able to sleep at night and change their sleeping patterns.

Even this small change can cause a person to be unable to participate in normal daily activities as they sleep during the day more.

Immobile Patient is Susceptible to Neglect

An individual who is immobile will rely on others for most if not all of their daily activities.

Extended immobility is related to the development of many chronic health conditions which arise from neglect when a person is not given the level attention they require.

This neglect causes otherwise preventable conditions like UTIs and open wounds on the skin to get worse and not get treated in an adequate manner.

This is by far the most common problem in nursing homes.  Busy nurses decide that they can ignore and abandon an immobile patient because, well, what is the immobile patient going to do about it?

Such patients typically have major health issues, including dementia, Alzheimer’s, or other issues that leave them incapable of reporting the neglect and abuse.

Busy nurses skip these patients as a form of corner cutting, thinking, “nobody will ever know.”

If a nursing home resident who was bed-bound or immobile suffered a serious injury, it is almost always because the medical facility did something wrong.  Plain and simple.

I’ve reviewed and investigated hundreds of these cases and the story is always the same: the facility did less for the immobile patient because of the fact the patient was immobile and the facility thought they could get away with cutting this corner.

The irony in this negligence is that immobile patients need MORE help, not LESS.

If you would like me to conduct an investigation into why an immobile patient was injured, I invite you to contact me.

I live and breath to hold negligent medical facilities accountable for their bad acts.  I am here for you.