Wrong prescriptions are almost always the result of:

I have investigated and litigated wrong prescription cases.  A treasure trove of internal documents usually reveal that the hospital or nursing home knows it messed up, and is involved in an attempted cover up to avoid liability.

Settlements for wrong prescription cases will vary on how deep that cover up runs, and the damages resulting from the medication error.

Below, I will walk you through the key issues in these cases and provide sample prescription error settlement amounts.

2 – Settlements for Wrong Prescription in Hospital

3 – Settlements for Wrong Prescription in Pennsylvania

4 – Settlements for Wrong Prescription in California

6 – Get Settlement Help for a Wrong Prescription Claim

Settlements for wrong prescriptions given in nursing homes are common, but that does not mean that these are easy cases to win.  Nursing homes will rarely admit their guilt outright and will instead deny liability until they feel there is no way to avoid a judgement against them.

If you believe that you are entitled to a settlement for a wrong prescription due to the negligence of nursing home staff, the best thing you can do is move as fast as possible to collect evidence.

Very often due to understaffing, poor hiring and inadequate training, nursing home staff give the wrong medication to residents.

The consequences of actions like this can be irreversible for many victims.  Wrong prescriptions can lead to long-term medical problems for some and in others it can lead to death.

Settlements for wrong prescriptions given in a nursing home can range in value depending on the specifics of the case.

The extent to which the mistake affects a person’s health, the length of time that the wrong prescription was given and the pain and suffering associated with the mistake all count towards the settlement value. 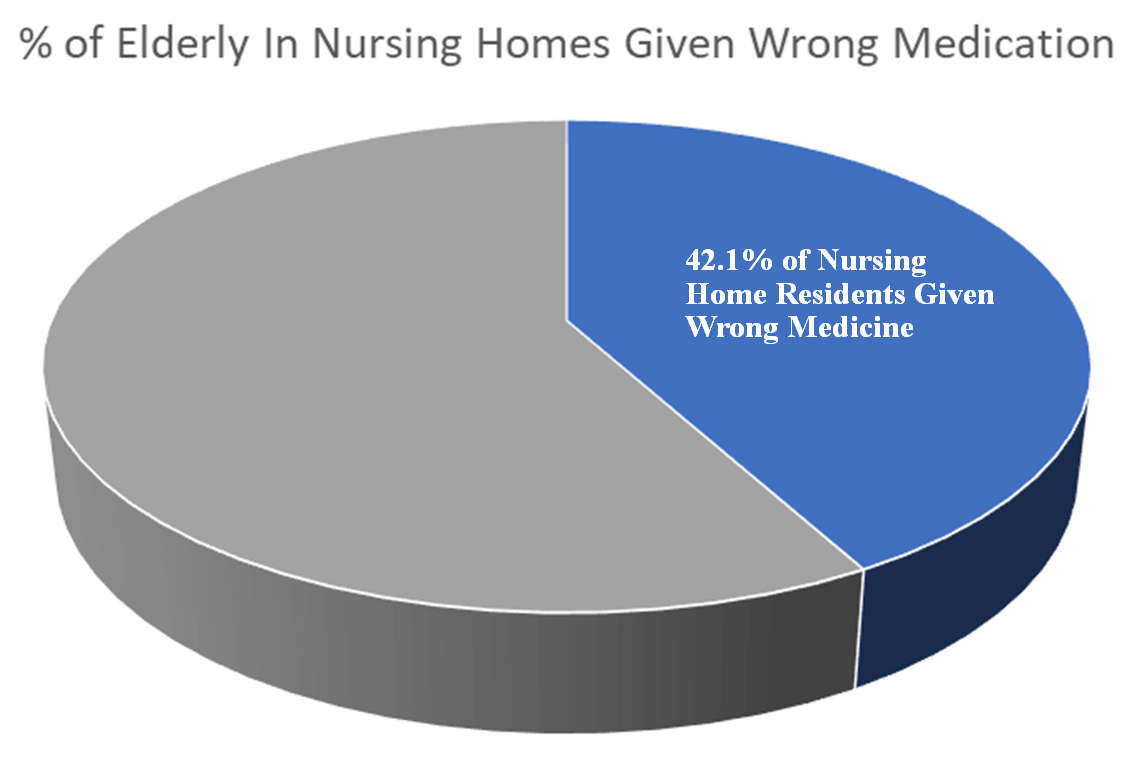 Nursing home patients have a high chance of being given the wrong prescription.

Studies have found that upwards of 42% of all elderly individuals will be given the wrong prescription.

Amongst those individuals there is a higher likelihood of being hospitalized and also more likely to die within 12 months of being given the wrong medication.

Some patients, nearly 20% are given the wrong medication more than one time, which again increases the chances that they will die because of the prescription mistake.

The elderly on average have a high chance in nursing homes of wrong prescriptions being given to them which in particular comes from poor staffing and poor training, neither of which show any signs of getting better in nursing homes.

Settlements for Wrong Prescription in Hospital

Hospitals are also forced to pay out settlements for wrong prescriptions.  Hospitals are not immune from liability when they make medication errors, especially when the error costs someone their life or causes them to remain ill longer than they should have. 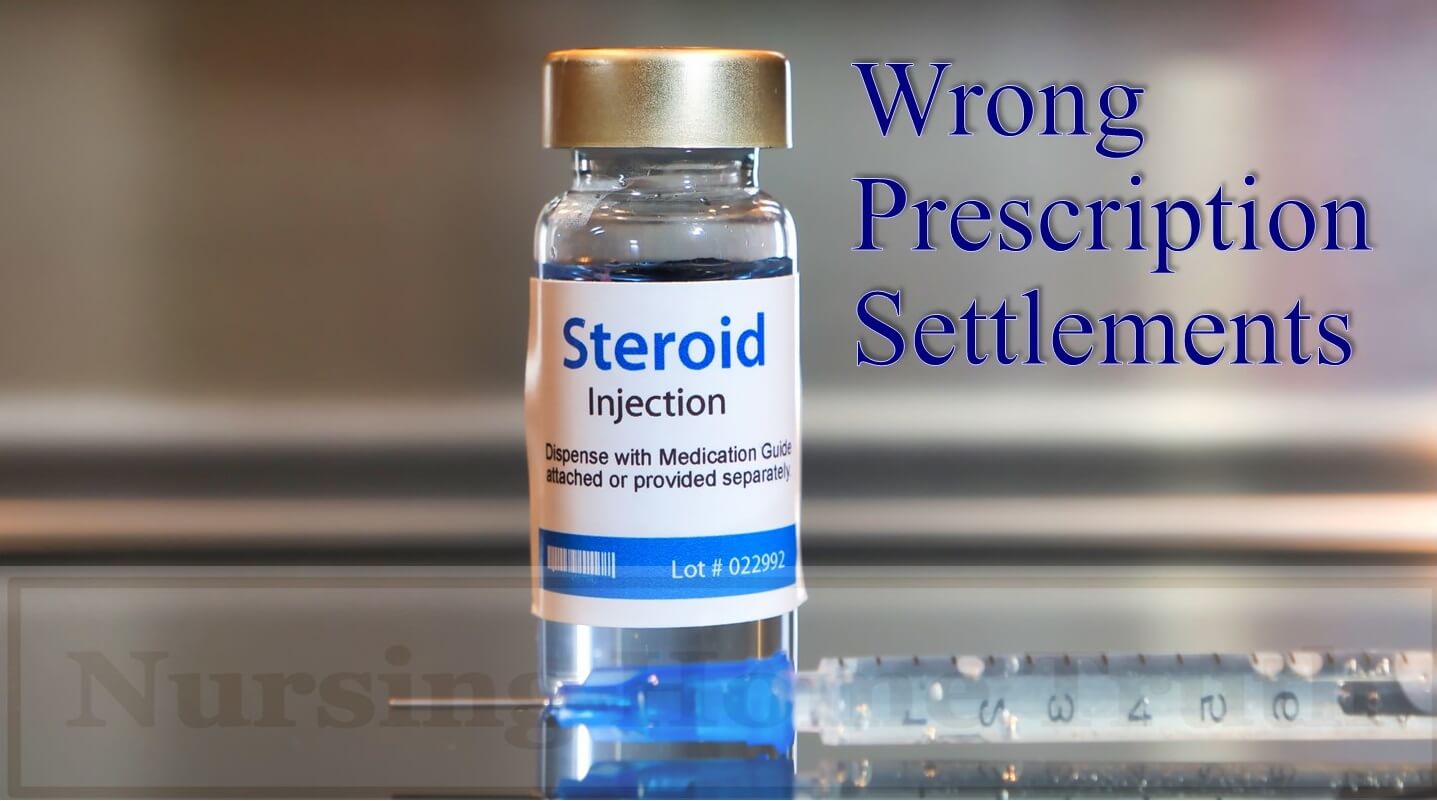 There is a high fluctuation in value for settlements for wrong prescriptions because medication errors can happen at one or many stages in the treatment of an individual.

A wrong medication can also come from many different people in the hospital.

Medication given incorrectly can cause an overdose or pain, suffering and even possibly death.

Even if all other aspects of the medication process go well, if a patient is not monitored after medication is administered, there can still be a settlement for wrong prescription administration if it leads to adverse health impacts.

Settlements for Wrong Prescription in Pennsylvania

$50,000 (Pennsylvania): Female patient’s medication was tripled after surgery for a broken hip. The medication mistake caused uncontrollable bleeding that led to the patient being transferred to the hospital where she developed respiratory problems and died.

Settlements for Wrong Prescription in California

California settlements for wrong prescription fluctuate similar to the averages seen in all other states.  Some California cases and examples can be seen below:

$600,000 (California): A patient who was unresponsive to her morphine tablets was given a large dose of liquid morphine which led to the patient’s death.  Coroner’s office determined that the patient died as a result of morphine poisoning.

$375,000 (California): A psychiatrist prescribed a medication that a pharmacist misread and dispensed at a dosage and interval far higher than it was meant to be which led to the patient to overdose and die.

Settlements for wrong prescriptions are higher when it is apparent that there was a clear mistake made on the part of the physicians who prescribe, the pharmacists who dispense and the nurses who administer medications.

A case in North Caroling settled for $7,500,000 when a patient suffered constant pain after nursing home staff withheld morphine from him while he was suffering from prostate cancer.  Despite his physician prescribing a dosage of 150 milligrams every 3-4 hours, the nursing home cut the prescription dose and administered a placebo which caused the patient intense pain.

A case in New Work settled for $225,000 when a patient was given an injection without the percentage of the solution being checked first.  The nursing home was found to be  negligent for ignoring the strong smell of the acetic acid, the bottle it was delivered in and the labeling, all of which should have warned them that the solution was too strong and should not have been used as a straight injection.

Get Settlement Help for a Wrong Prescription Claim

If you were given the wrong prescription and it caused you any harm, loss, or injury, you are legally entitled to claim a recovery from the medical facility and staff that did this to you.

You deserve justice, and I ready to recover it for you.  Reach out to me day or night for help.

Wrong Prescription Legal Help Near You in Baltimore, Maryland & Beyond