Average Compensation for a Broken Hip

To get you the average compensation for a broken hip, I sifted through over 25,000 (yes, you read that correctly) settlements and verdicts using private attorney resources I have at my disposal.  Those were primarily car collision compensation payouts.

I wanted to discovery compensation amounts for broken hips in the nursing home setting, too. Thus, I went through about 5,000 nursing home cases as well.

In other words, I sincerely doubt you will find a more accurate or comprehensive accounting that uncovers the average compensation for a broken hip, especially in the nursing home setting.

As an added bonus, I provide, free of charge below, summaries of some broken hip settlements and verdicts that I uncovered and reviewed in my research.

If you have questions or need help calculating your potential compensation for a broken hip, send me an email or fill out the contact form at the bottom of this page.

Compensation for a Broken Hip

4 – Compensation for a Hip Injury Q&A

5 – Maximize Your Compensation for a Broken Hip

How Much is a Hip Injury Worth?

Hip injuries are very common in nursing homes and in in general in elderly individuals.  These hip injuries generally result from negligence or accidents.

How much a hip injury is worth will come down to what caused the fracture, how severe the the fracture is, and the demographic realities of the person who has been hurt.

A broken hip in an elderly victim should not be taken lightly because it can lead to serious debilitation and even death.

The average compensations for a broken hip do take these realities into consideration.  Attorneys strive to account for each possible variable in your favor.

Average Compensation For A Broken Hip in Nursing Homes

One reason that the average compensations are high in many broken hip cases is that survival and possibility to return to any normal life after these fall is unlikely.

The high rates of breaks in the hip in nursing homes coupled with the advanced age of these residents ensures that there is always a high chance that round the clock care will be needed as individuals are not able to return to pre-injury functional status.

Efforts have been made protect and mitigate hip breaks in older populations in nursing homes, but these have not found a level of success that suggests any change in the frequency of these injuries.

When attempting to assess how much a hip injury is worth, age and the way that the injury took place makes a large difference in the average compensation amount.

That latter figure gets even higher if the hip injury led to surgery that itself had further complications.

For many people a hip injury can result in death because of the pain, possibility for infection and need for surgery.

For those who are older, there is an even higher chance that a hip injury can mean death, especially when they are too fragile to undergo surgery.

Hip replacements and fractures are serious and recovery is invasive even for those who do not have additional health problems.

For those who also have conditions like obesity, advanced age, or prior bone injuries, the potential for mortality is even higher.

◊   Age of the individual

◊   Severity of the break

◊   Prior and current medical conditions

These variables will also impact the speed or likelihood that you receive a hip injury settlement at all.

$187,000.00 (Texas): A 56-year old woman was in rehabilitation after a stroke when she suffered a fall while being taken into a shower.  The average compensation for a broken hip in cases like this tend to be around $150,000 to $200,000 which is where the settlement fell in this case after the parties came to an agreement on the negligence of the nursing home in the fall.  Her existing medical conditions, mainly the recent stroke, made the recovery potential and possibility much more difficult which added to her settlement value.

$300,000.00 (North Carolina): How much a hip injury is worth will get much higher when it results in a snowball effect in which the initial injury leads to additional injuries and deterioration in health.  A 77-year old woman suffered a hip injury after she fell in an assisted living home.  Her hip fracture required surgery and only one month after the surgery, she died as she was not able to recover from the injury and the surgery process.  The defendant denied liability for the initial break but the decedents counsel argued that the slippery floor in the nursing home led to the fall which caused the initial broken hip which ultimately caused her death.

$275,000.00 (Pennsylvania): While in the care of a nursing home, a 68 year old make resident fell when being moved from a wheelchair to his bed.  The fall resulted in a broken hip that required surgery and further nursing care in a home.  A year after the broken hip surgery the resident of the nursing home passed away with the nursing staff denying any liability.  The average compensation for this broken hip case was increased because the long-term consequences were devastating and the broken hip was identified as a reason for the shortened life span of the decedent.

$260,190 (Texas): The outcome in this case was just over $20,000 of past medical expenses, and the rest for pain and suffering compensation related to the hip fracture.  The victim was a 90+ year old resident in a nursing home.  She fell because the negligent facility staff failed to properly supervise her, leaving her unattended, and resulting in her being knocked down by another resident in a wheelchair.

Average Compensation for a Broken Hip 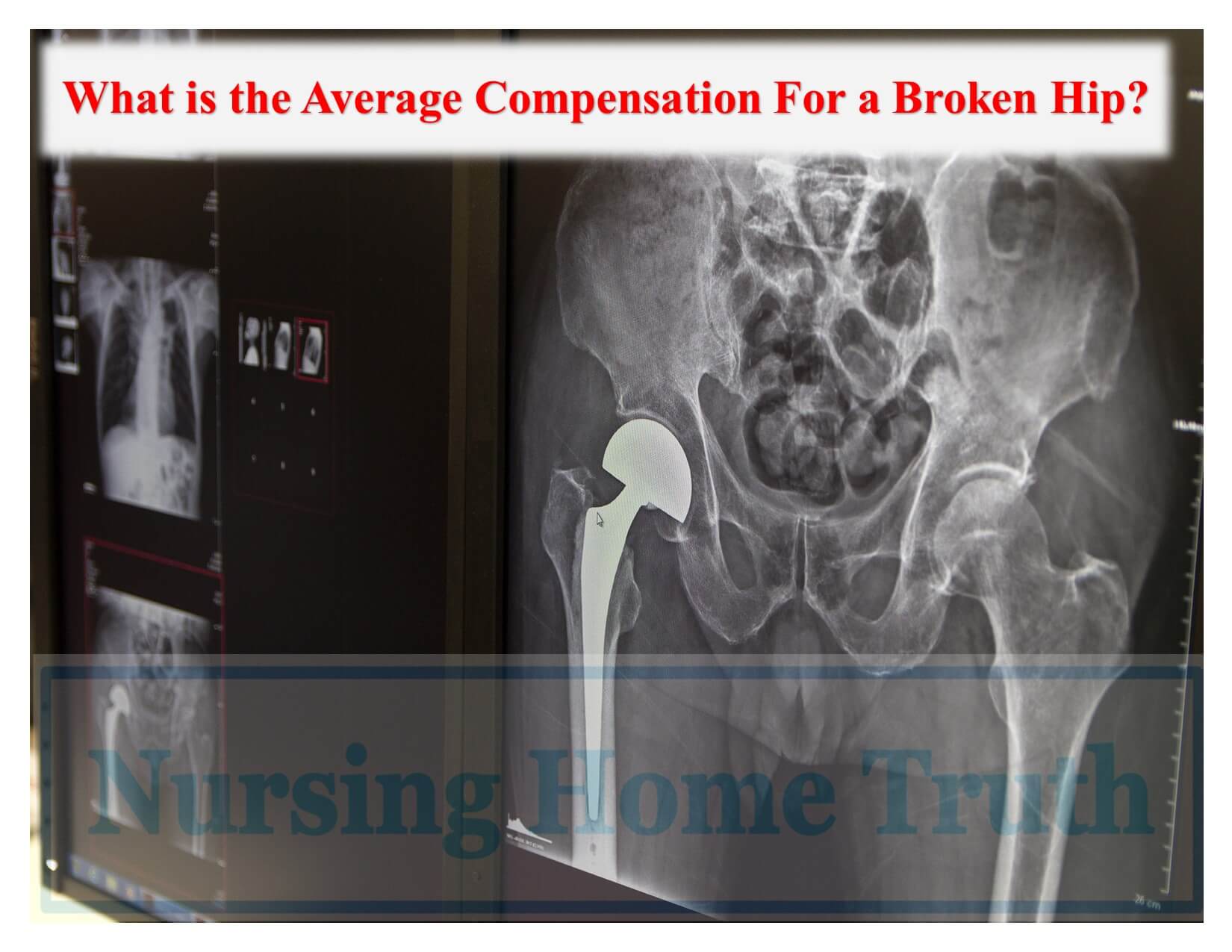 One important thing to remember about average compensations for a broken hip is that the dollar value varies a great deal based on specifics of your case.

Some compensation averages run on the lower end under $100,000, which is more frequently seen in cases where the individual is able to recover faster, does not need intensive surgery or does not have detrimental illnesses develop in the recovery process.

If you are unsure how much your hip injury is worth, you can ask yourself some questions to get a better understanding of your potential value:

◊   Was my recovery process long?

◊   Did the individual pass away as a result of the broken hip?

Average settlements depend on the answers to these, and a host of other, questions.

The more adverse results and events that arise because of the broken hip, the more likely you are to receive an average compensation on the higher end of the settlement range.

Compensation for a Hip Injury Q&A

What is the average settlement for hip surgery?

Based on the thousands of cases I sifted through, the average settlement for hip surgery cases is around $100,000, but you should review the facts of those cases to see if your case is similar to the value of other cases.

How much is a hip injury worth?

How much can I claim for a broken hip?

How much you can claim for a broken hip will depend on the factors outlined above in this article, such as surgery or whether the injury caused death, but putting all that aside there is no dollar amount that limits you other than any statutory caps on damages in your jurisdiction.

Maximize Your Compensation for a Broken Hip

As the above case results illustrate, the average compensation for a broken hip will vary greatly depending on your case facts.

One of the key facts, that I noticed in my research, which made a big difference in compensation amounts was whether the broken hip contributed to the victim’s death, or whether it required surgery.

That said, do not cherry-pick out facts from your case (e.g., surgical v. non-surgical) and use that as the foundation to, in conjunction with the above samples, reverse engineer the value of your claim.  It just doesn’t work like that.

I have separate injury and case value checklists, some of them pages long, that I go through for each case type.  Having done this for 10+ years, I know where the pressure spots are in broken hip cases, and what facts lead to bigger compensation payouts and higher average settlements.

I welcome you to use my years of experience via a free consultation.  Call, email, or fill out the contact form below for help.