Average Compensation for a Broken Pelvis

The internet is littered with attorney articles estimating the average compensation for a broken pelvis.  I don’t know what those averages are based on, but I’ll share with you my methodology.

Below, you’ll get the results of my research, including summaries of the some of the settlements I found and reviewed as part of that research.

If you have questions, about the research or potential compensation for your broken pelvis, email me for help.

4 – Maximize Your Compensation for a Broken Pelvis

A broken pelvis can be a life-threatening condition for elderly victims.  Those who are elderly have a high risk of death from this injury for a few reasons:

◊   Those who are of advanced age have weaker bones, women in particular have this problem, which leads to multiple fractures

These factors are why mortality rates are so high when there is a pelvic fracture in a nursing home resident.

Susceptibility to Pelvic Fractures in Elderly

The reason that average compensation for a broken pelvis is generally high for those in nursing homes is that older people have high fragility. For them, fractures do not heal well or on their own and can cause serious medical complications during recovery.

Finding ways to predict these pelvic fractures are difficult.  While some predictive measures exist, it has not helped slow down rates of hip fractures in nursing home residents.  I still happens frequently and incidence rates get higher the older the individual is.

The seriousness of a pelvic fracture means that long-term debilitation is possible, the need for multiple surgeries and, potentially, even death.

$240,000.00 (Wisconsin): An 87-year old female resident of a nursing home was receiving rehabilitative services for a hip replacement. During her stay at the facility, poor planning and care led to her suffering a fractured pelvis.  This required additional surgeries which led to the pelvic fracture being a permanent injury.  The average compensation for a broken pelvis often factors in the age and the limitations placed on the rest of the individual’s life, which is what was done here as both age and the permanence of the injury were considered in the final value amount.  The care home denied liability but it was found that they did not follow standards of care which led to the accident taking place which broke the resident’s pelvis.

Resident received compensation for broken pelvis after falling out of bed

$650,000.00 (Florida): A nursing home resident fell out of bed on three occasions and in the first two cases the resident was not offered any medical care. Additionally, after the first two falls, nothing was done to ensure there was not a third fall.  The verdict for this was higher than many average compensations for a broken pelvis because of the well documented lack of attention towards supervising medication intake, and supervising safety needs.  These actions showed that the broken pelvis came directly from the nursing home’s actions, or inaction of the nursing home and its staff.  Worth keeping in mind that the larger results like these bump up the average compensation for a broken pelvis, and arguably skew the numbers.

$23,000.00 (Oklahoma): A settlement was reached in the case of a 96 year old woman who fractured her pelvis when she fell off a toilet in a nursing home. Because she was left unattended, the family stated that the defendants were negligent in their care. This amount came at the lower end of the average compensation for a broken pelvis because of the limited damage the pelvic fracture had on the resident. My suspicion is, though I didn’t find facts on it, that the resident’s pre-injury mobility was already compromised and this reduced the compensation she received for her broken pelvis. 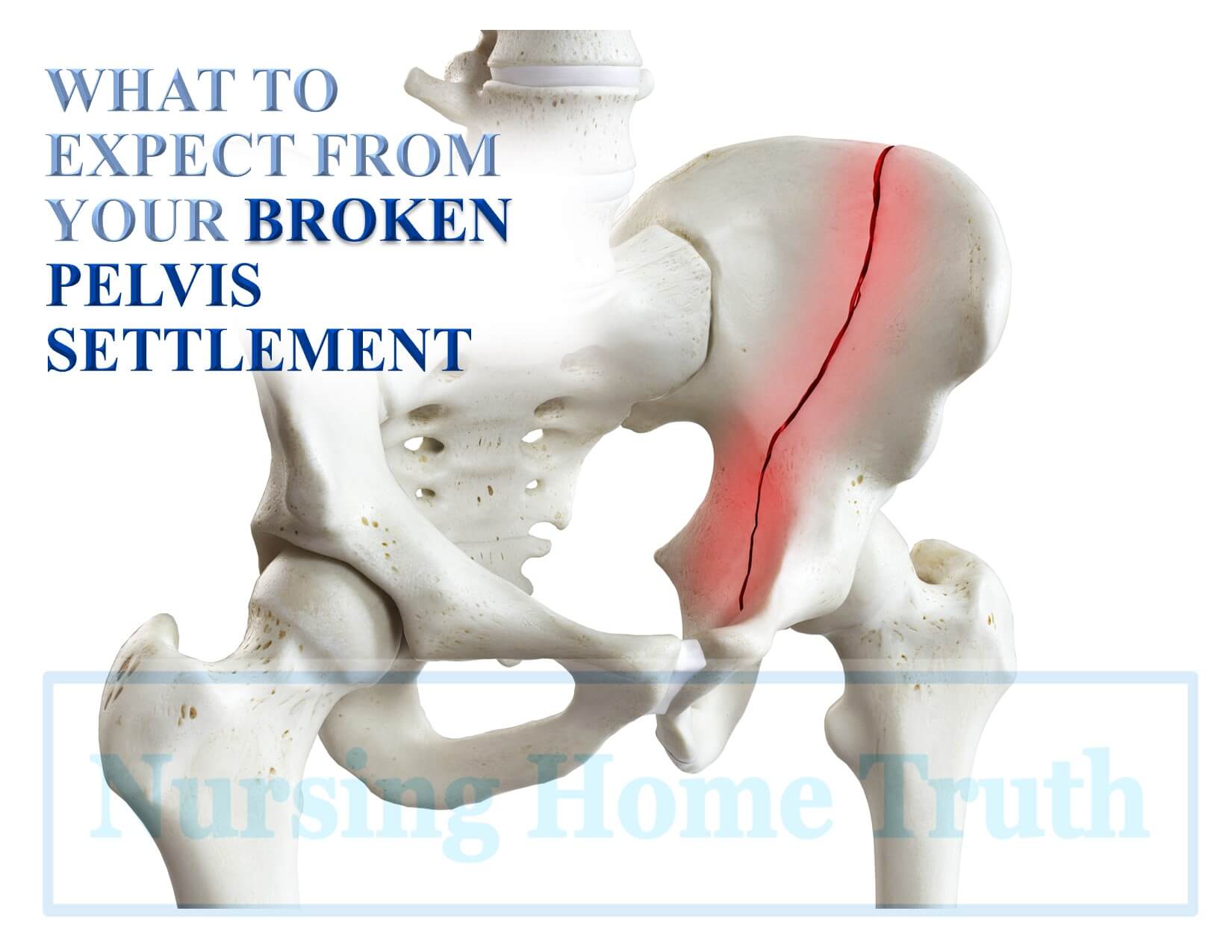 $88,750.00 (New York): To determine where you will fall on the scale of average compensations for a broken pelvis your age and existing activity level are often highly important.  In this case, a fairly sedentary older retired female was hit while in a parking lot.  The accident caused her to suffer a broken pelvis that did not require surgery.  An agreement between the parties led to a compensation payout that was agreed to for the pain and suffering sustained in the injury.

$240,000.00 (Pennsylvania): A drunk driver ran through a flashing red light and t-boned into another vehicle that was going through a yellow light.  The impact of the accident caused intense damage to the plaintiff who suffered amongst other things, a broken hip that required surgery and months of recovery time.  The defendant’s insurance attempted to make the liability shared between the parties, but a court found that the negligence was on the part of the defendant and awarded a sum over $200,000 to the plaintiff for the injuries that she suffered.

$167,000.00 (Iowa): An elderly male driver was on a local road waiting at a traffic light to turn left when a car coming from behind him failed to show caution and slow down in time.  This led to the plaintiff’s car being hit from behind with enough force to push his car into the intersection and hit by a third non-party vehicle. Plaintiff suffered multiple broken bones including a broken pelvis that required surgery.  The defendant’s insurance claimed that the value being requested by the plaintiff was higher than other average compensations for a broken pelvis and that the amount should be reduced because of the lifestyle and age of the individual in the accident.  The plaintiff’s counsel argued that the value being offered in the original settlement offer was not taking into consideration the pain and suffering that was dealt with by the plaintiff which led to a higher payout after the negotiations went to arbitration.

Compensation for a Broken Pelvis Q&A

How much compensation will I get for broken pelvis?

Is a broken pelvis a serious injury?

Yes, a broken pelvis is a serious injury and, as described above, it is so severe that it can result in death especially in elderly victims which gives rise to lawsuit settlements in excess of half a million dollars.

What are long term effects of a broken pelvis?

How much is a pelvic fracture?

In terms of how much a pelvic fracture is, cost-wise, it is less than $500 for non-displaced fractures with closed treatment but can be well over $140,000 for open procedures in metropolitan facilities, all which is taken into account in your pelvic fracture compensation amount.

Maximize Your Compensation for a Broken Pelvis

This is a substantial mobility limiting injury with extended non-economic damages components.  If those components are handled well, the full value of your injury will reveal itself to ensure you get justice for the negligence that has fallen upon you.

I wish you a speedy recovery, and hope that you bounce back from this.

If you need my help, fill out the contact form below or email me for a free consultation.