As I write this article, I am currently investigating over 30 wrongful death nursing home cases.

It may be fair to say, I know a thing or two about wrongful death settlements, including in the nursing home litigation setting.

To learn about my background, or the potential nursing home wrongful death settlement value of your claim, reach out to me for a free consultation using the contact form at the bottom of this page.

When you’re litigation against medical professionals, you are often the underdog and this can negatively impact your settlement value.

Proving negligence that led to death, getting the needed evidence to strengthen your case, and facing challenges from medical professionals are all some of the roadblocks you may face as you attempt to settle your wrongful death lawsuit.

Whatever the eventual number may be, the purpose of a wrongful death settlement is an attempt to monetarily right the wrongs that were done to you.

Specifically, those settlements are intended for certain family members of the victim who died.

While this does not in any way lessen the loss suffered, it does help to hold responsible those who were responsible for the death of your loved one.

Wrongful death settlement from a fall in a nursing home

$82,500.00 (Florida): A wrongful death lawsuit settlement was agreed on between parties after an 81-year old woman suffered a stroke when she suffered damage to her head.  The injury came from a fall from her bed when an employee who was sitting on her bed got up quickly causing a shift in weight that pushed the resident off the bed headfirst.  The lack of care and supervision which led to the fall and death caused there to be an assessment that this should have been foreseeable and avoidable.  The defendant denied liability initially but ultimately agreed to the settlement with the deceased family.

$125,000.00 (Pennsylvania): An 80-year old female who was under the care of a nursing home was admitted with the express understanding that she would need specific assistance with ambulation and most movements.  Despite these specific instructions, the resident suffered nine separate falls in 6 months which resulted in the need for multiple surgeries for broken bones which led to her death.  The wrongful death lawsuit settlement agreed on by the parties was compromised in value because the pre-admission assessment had no effect on the care and resulting injury event.

$73,000.00 (Illinois):  This nursing home wrongful death came about after a resident suffered a cut above her eye that led to the need for surgery.  The post-op care in the nursing home resulted in dehydration and falls that led to the individuals death.  The family of the deceased contended that the nursing home did not do enough to provide hydration, rehabilitation care and measures to make sure there was protection against falls.  Again, this particular settlement was compromised – meaning it’s value was lowered – due to defects in the relationship between the evidence and the ultimate death. 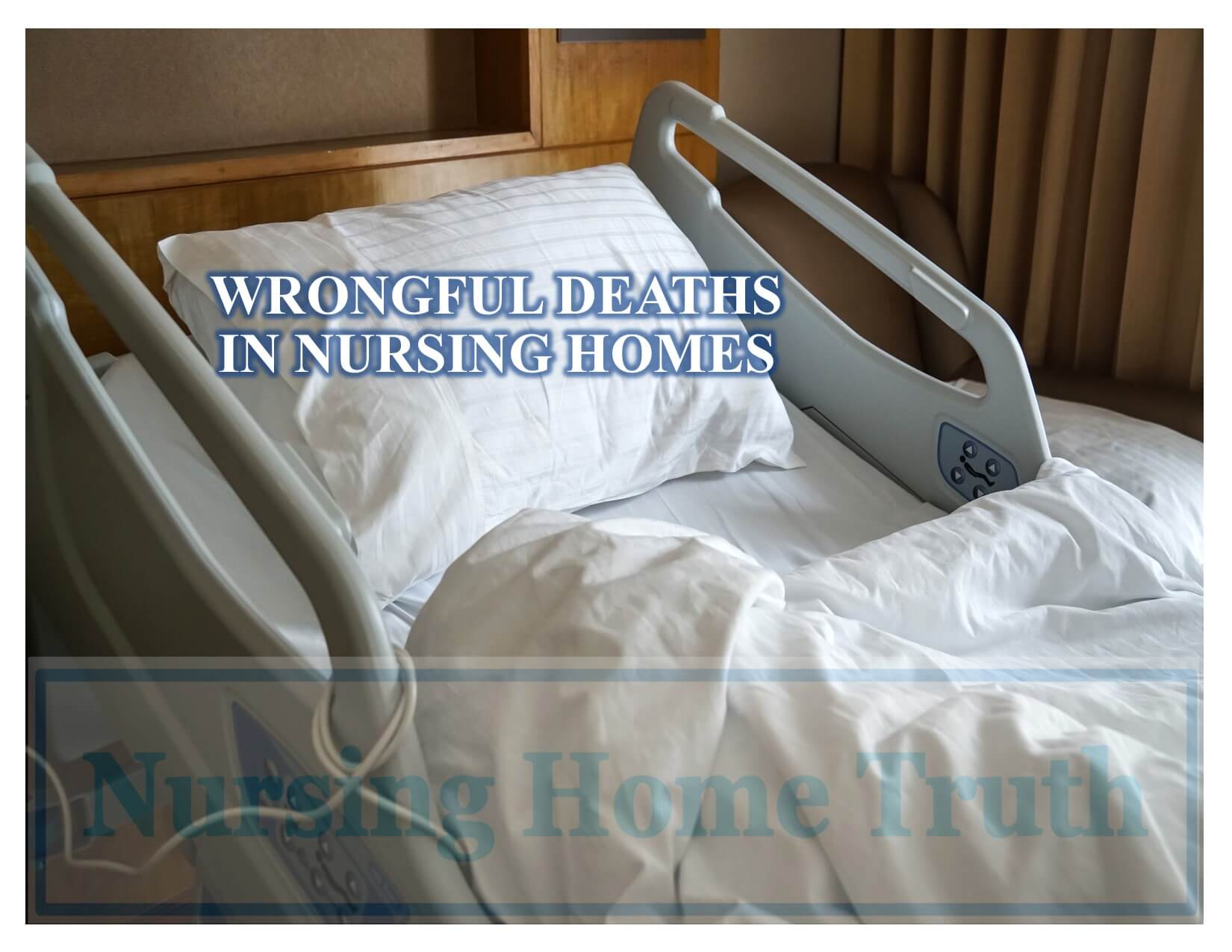 Average nursing home wrongful death settlements may hover around $400,000.00-$600,000.00 in most cases, but in other cases, they can get significantly higher.

In 2018, one wrongful death settlement came close to $400 million dollars when individuals died in a medical facility.

Other settlements have reached $1,500,000 to $4,000,000 in cases of intense neglect that led to the death of an individual.  This is because the worse the liability, the greater the result, typically.

The age of the person who dies, the specifics of what has caused their death, and how much negligence is involved all adds up to why some cases get bigger results.

Take for example a California nursing home settlement for wrongful death related to mishandled medication administration, leading to a recovery of nearly $4,000,000.00

Cases like this are not uncommon as seen in a New York case where a man choked to death when the nursing home staff failed to put his dentures in before he ate, which resulted in a nearly $2,000,000 settlement that the nursing home paid to make the case go away.

Average settlements for nursing home wrongful death cases are not always this high, but in some cases, the situation warrants it.  Case by case analysis is needed to figure out the value of a particular case.

$4,850,000.00 (Michigan): Some of the largest wrongful death settlements and verdicts come about because of malpractice on the part of medical professionals related to medication intake.  In this case, a 57 year old male was receiving treatment when he was prescribed Vicodin, a Duragesic patch, as well as fentanyl and morphine without care.  The overload of strong narcotic medications led to the patient’s death because multiple injections were given but not being recorded in the medical documents.

$1,064,502.00 (Pennsylvania): A nursing home failed to provide adequate medical care to an individual who was in distress and needed help after a fall.  The short-staffed medical facility not only failed to get the individual help but went out of their way to conceal the fall which had resulted in a broken bone.  Initially the nursing home attempted to deny liability but then switched and worked to resolve the claim.  The nursing home’s wrongful death offer of $100,000 was rejected, and it was forced to payout $1,064,502 for causing the death in this case.

$750,000.00 (Texas): This nursing home wrongful death recovery came about after a 65-year old female died while she was in the care of a nursing home for rehabilitation after a hip surgery.  The facility did not have adequate staff and the limited staff that it did have, was not at all properly trained which led to the resident failing to get treatment and rehabilitation for her post-surgery needs.  This lack of care led to sores, infection and ultimately death.  The nursing home attempted to say that previous medical conditions including diabetes and smoking were the cause of the resident’s death.  The decedent’s 5 adult children countered this with a wrongful death claim that went in their favor in court where the jury agreed that the death was the result of the care homes direct actions.  I am a little surprised by the wrongful death payout in this claim, given that there were 5 beneficiaries.  There is a damages cap in Texas, but that shouldn’t have limited the recovery to just 750k.

While this list can be long and dynamic, based on your own specific situation, a few things will usually have an impact across the board:

◊   The age of the individual who died

◊   What were the potential future earnings of the individual

◊   Bills and expenses related to the injury and death

Average wrongful death settlements do vary but they also tend to stay around the $600,000.00 to $800,000 mark for a majority of individuals.

Some cases are much lower than this, which happens more often when there is a settlement on a case where the variables and negligence are not as severe.

Nursing home wrongful death settlement and verdict values, therefore, can vary substantially based on the extent and manner of negligence involved.

How much is a nursing home wrongful death settlement?

I know the answer to how much a nursing home wrongful death settlement is because I researched it and listed out the results for you above, which you should read to figure out the value of your case, but the average is between $600,000 and $800,000.

How much is a wrongful death lawsuit worth?

How are wrongful death settlements paid out?

Wrongful death settlements are paid out in two different ways, which will depend on if you get your result at trial or some time before that during pre-trial, and will vary from a structured settlement to a lump sum owed to you in 30 days, usually paid out with a check to your lawyer.

Can you sue a nursing home for wrongful death?

If you lost a loved one due to nursing home negligence, you are a likely beneficiary and may recover a settlement for a wrongful death claim.

To find out more about your rights, and to bring truth to what the nursing home did to you and your family, I invite you to call or email me for help.