Can You Sue Someone for Emotional Abuse

Can You Sue Someone for Emotional Abuse

The short answer is, yes, you can sue someone for emotional abuse.  The corollary question is, is it economically viable to do so given your specific facts and case?

That is a much more complicated answer, which I will try to answer for you below.

If after reviewing this article you still have questions, call me or submit the contact form on this page for a free consultation.

2 – What Does The Court Consider Emotional Abuse?

3 – Can You Sue Someone For Emotional Abuse?

4 – How Much Compensation Can You Get For Emotional Abuse

5 – How To Sue For Emotional Abuse

6 – Get Help With your Emotional Abuse Lawsuit

Emotional abuse refers to a the action of hurting another individual through a number of harmful and negative methods.

There is often a fraud like nature of coercive control that is used against someone to embarrass them, shame them, blame them or generally demonize and manipulate them and their emotions.

Emotional abuse can be levied against anyone at any age.  This form of abuse can come from family members, loved ones, significant others or those whose care you are placed in. 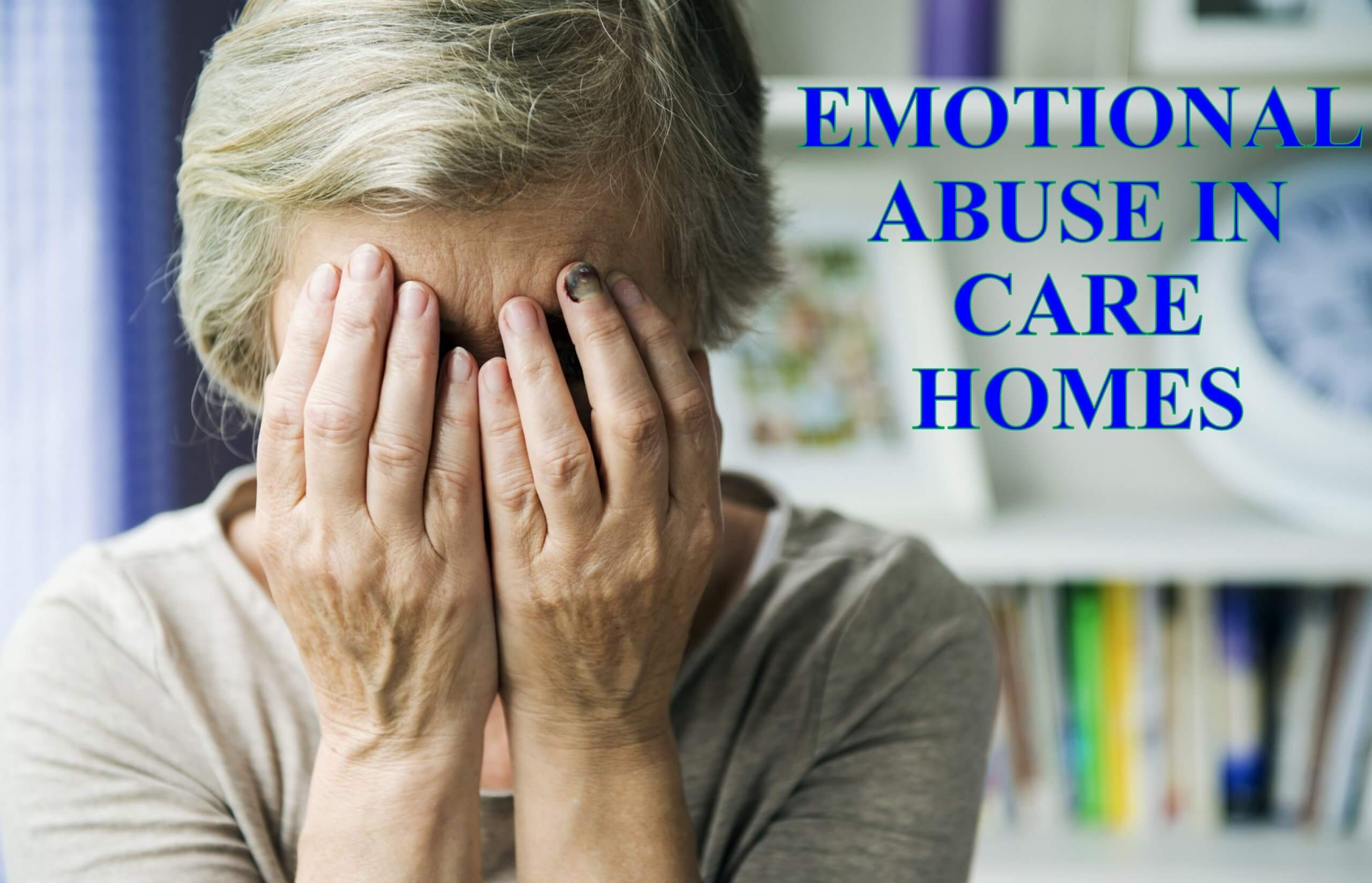 Emotional abuse in care homes is common for many because they are diminished in their capacity to live alone or take care of themselves.

This happens because individuals who are elderly often live full-time in an assisted living facility or have much of their care in the hands of care nurses in retirement homes.

The emotional abuse that elderly and disabled individuals receive in care homes often comes with a number of other forms of abuse including physical, psychological and financial abuse.

Unlike physical abuse against people in care homes, where visible injuries can be documented, emotional abuse is harder to detect and record due to “similarities in its symptoms with behavior that can come with age alone, especially withdrawal, depression, and aggression”.

While there is no denying that it is hard to identify emotional abuse, there are some common signs that are frequently associated with cases of this abuse.

The signs that someone may be the victim of emotional abuse can be, but are not limited to:

◊ Has a hard time controlling their emotions

At times you can also identify when another person is being emotionally abusive.  If you see that an individual is acting, towards you or another person, in the following manners, emotional abuse may be involved:

◊ The individual is hyper-critical of you or the other person

◊ You notice that the individual in question is highly judgmental

◊ The feelings of the other person, or yourself are dismissed or trivialized

It is important to keep these signs of emotional abuse in mind and to be aware of them because more often than not, people are not aware that they are being emotionally abused.

This allows them to be abused for a long time before they even know that they should or can get help.

The CDC has identified emotional abuse as a highly damaging part of development and research shows that anywhere between 50%-80% of adults may experience emotional abuse in their lifetime.

Even worse is that since many may not know that they are even victims of abuse, will blame themselves for problems and for being treated poorly due to the other party’s manipulative behavior.

For elderly individuals, this means keeping quite when they are feeling hurt and emotionally abused because they blame themselves.

What Does The Court Consider Emotional Abuse?

The courts have created more protection for and better definitions for emotional abuse as the problem is clearly not getting better, and in some areas, is getting worse.

One specific are where emotional abuse is on the rise, or getting worse is with the elderly population.

A main driver for this uptick is that as more people live longer the prevalence problems like abuse have, and will continue to increase.

Since the courts have also noted this increase in the problem, they have taken this increasingly into consideration with laws and policies to support and protect the elderly community.

Emotional abuse is also known by other names like mental abuse and psychological abuse.  This verbal-based harassment results in trauma for the victim and the civil courts as well as the criminal courts in extreme cases, can help a victim get justice and compensation.

While there is no singular legal definition for this form of abuse, some basic underlying tenets include harassment of an individual or harmful repetitive language.

The Department of human Services states that emotional abuse is “the intentional infliction of anguish, distress, or intimidation through verbal or non-verbal acts or denial of civil rights”.

Can You Sue Someone For Emotional Abuse?

If you want to know if you can sue someone for emotional abuse, the answer is yes.  Around the country more and more courts have increasingly accepted and recognized that emotional abuse can cause intense damage to an individual.

The ability to sue in court for damages allows individuals and the families of victims to get compensated for their mistreatment, or the mistreatment of their loved one.

It is important however to note that you must prove that the emotional abuse took place according to the legal definition of emotional abuse in your state.  This is where the help of an attorney experienced in elder care law, emotional abuse and tort laws can help your case.

Collecting evidence such as medical records, video, audio or photographic evidence and eyewitness reports can all help your elder emotional abuse attorney to help you go after multiple kinds of damage including wrongful death damages and punitive damages.

Is Suing For Emotional Abuse Difficult?

While you can sue for emotional abuse, you should know that the process is a complicated and often tricky one that requires experience and high levels of competence.

Not only is it difficult to sue for emotional abuse because the abuse is not visible but because getting an emotionally abused individual to state they need help or have been abused is also difficult.

Making sure that you are able to obtain consistent testimony as well as physical evidence or witness statements, are all imperative steps to help make the process easier.

To connect the dots between the emotional abuse and the damages you have sustained will involve considerable work and itself be another difficult aspect of the process.

Even when all this is accomplished, we must address whether it is economically viable for you to sue someone for emotional abuse.

How Much Compensation Can You Get For Emotional Abuse?

Compensation values that you can recover for emotional abuse can vary from state to state and case to case.

How strong is your case?

What evidence do you have?

Which region or state are you in? What laws exist in your favor where you are planning to sue?

The compensation value of an emotional abuse case really will depend on whether you settle your situation out of court with the help of an attorney or are awarded a verdict by a jury who believes your emotional abuse was deserving of the higher value ultimately awarded.

Unless the harm to you is substantial (not in your eyes, but in the eyes of neutral people who do not know you and are not involved in your life; i.e., a jury), which is to include systematic and repeated conduct, your case is likely not worth pursuing.

Also, unless the person you are suing is rich and has lots of assets, it will similarly be not economically viable to sue that personal for emotional abuse.

Many states also have a physical injury component; meaning, you must have suffered certain physical ailments as a result of the emotional abuse, or else you cannot recover.

How To Sue For Emotional Abuse

Suing for emotional abuse requires some steps that you will need to take part in regardless of what state  you are in.

The emotional abuse lawsuit process is a formal legal one that needs to take place through your local courts.

The way that you will sue starts with filing proper paperwork, and in order to do this, a qualified professional needs to help you.

What Steps Are Needed To Sue Someone For Emotional Abuse

Identifying, documenting and collecting evidence are some of the first steps that anyone will need to take in order to start the ball rolling on an emotional abuse case.

After this, the best course of action is to discuss your issue with a qualified attorney who can help counsel you on what you need to do next.  This is an important step to take because if you need to know whether or not you should sue, an attorney can help you with that.

Once this has been done you will need to file a lawsuit and then go through the motions of pre-trial preparations and lastly, go through the trial and settlement process.

Get Help With your Emotional Abuse Lawsuit

So, can you sue someone for emotional abuse?  There is only one way to confidently know the answer to this, and it is to get a free consultation from an attorney.  Because as you learned above, the abuse must be substantial, physical elements may be necessary, and a defendant from which you can financially recover must exist.

To learn if your claim satisfies these elements, call me or submit the contact form on this page for a free consultation.

Emotional Abuse. 2021. Are You Being Emotionally Abused? Psychology Today.

Emotional Abuse Lawyer Near You in Baltimore, Maryland & Beyond